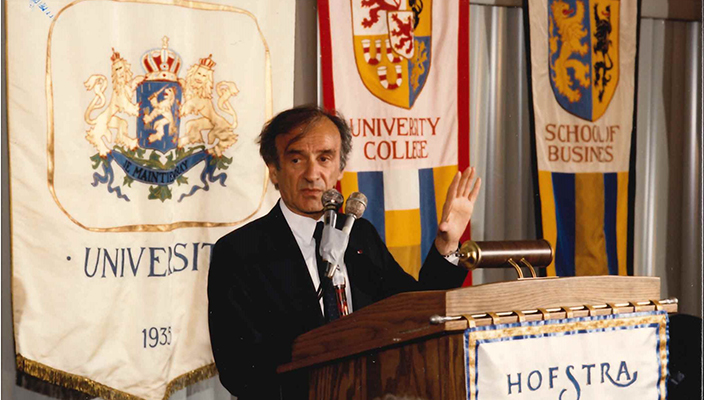 Hofstra University is saddened by the loss this past weekend of Nobel Peace Prize winner Elie Wiesel, Holocaust survivor and author of the unflinching memoir Night.

Dr. Wiesel visited the campus on several occasions, inspiring all those who were privileged to hear him speak. He was an honoree at Hofstra’s 1975 commencement activities. He returned in 1988 to serve as the banquet speaker at a Maurice A. Deane School of Law conference, Group Defamation & Freedom of Speech – The Relationship Between Language and Violence, at which he was honored with a Hofstra Presidential Medal. Hofstra Law Professor Monroe Freedman, who died in 2015 and served as the director of this conference, had worked closely with Dr. Wiesel as the first executive director of the United States Holocaust Memorial Council from 1980-1982.

Dr. Wiesel was last on campus in 2000 to meet with student leaders and deliver an address titled “Building a Moral Society” to an overflow crowd at The Helene Fortunoff Theater.