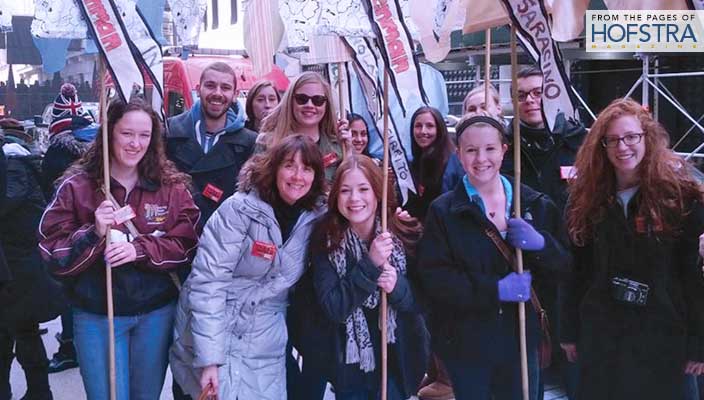 When Mary Anne Trasciatti first learned that  New York state would fund a memorial to the 1911 Triangle Shirtwaist Factory fire, she was, uncharacteristically, speechless.

“I struggled to find the words to express my emotions,” said Trasciatti, a professor of rhetoric and women’s studies at Hofstra and president of the Remember the Triangle Fire Coalition, describing her reaction to Gov. Andrew Cuomo’s announcement of a $1.5 million grant to fund the memorial project.

The Remember the Triangle Coalition, formed in 2002, is a nonprofit group that is working on a permanent memorial on the Greenwich Village site of the historic fire, which killed 146 garment workers, most of them immigrant women, more than a century ago.

On March 25, 1911, a fast-moving fire raced through the upper floors of the Triangle Shirtwaist Factory on Washington Place, trapping workers on upper floors, behind doors locked by managers to prevent theft. The factory building had only one fire escape, which collapsed during the blaze, and firefighters’ ladders reached only to the sixth floor of the 10-story building.

The Triangle Fire, which was the deadliest workplace disaster in the United States for almost a century, ushered in historic worker and fire safety reforms. Yet the lives of the women who perished remained largely unknown, except for one day each year when advocates, family members and firefighters gather at the building carrying shirtwaists bearing the names of the victims to commemorate the fire’s anniversary.

The Triangle Fire memorial will feature steel panels etched with the victims’ names installed on the building, which is now owned by New York University. NYU supports the memorial at the site. The total cost of the memorial will be an estimated $2.4 million.

“Creating a memorial that names women who worked hard and struggled and whose lives were lost, especially in this city where there are so few memorials to women, especially immigrant women, it’s a really big deal,” Trasciatti said.

Trasciatti led a panel discussion and exhibition at Hofstra earlier this year to commemorate the fire’s 105th anniversary. But for her, the effort is more than academic.

“My mom was a garment worker, and I remember her telling me she knew that she and the other women in the factory were safe because of Triangle,” she said. “Also, it’s a part of my history as an Italian American, a woman and a New Yorker.”