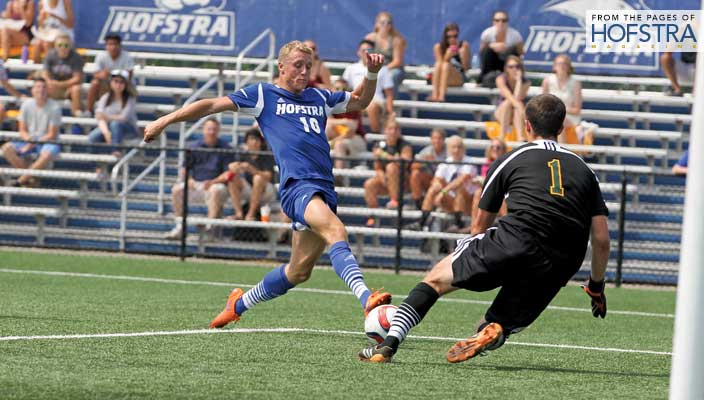 Hofstra’s soccer programs have experienced their share of success through the years, and the 2015 Pride season saw both squads advance to the second round of their NCAA Tournaments.

Since 2004 the two programs have combined for nine NCAA Tournament appearances, with each feeding off the other’s success as they strive for CAA championships and NCAA appearances.

Hofstra was one of only 10 schools to have both soccer programs appear in the second round of the NCAA Tournament.

“The success of our program in 2015 was thoroughly enjoyable,” Riddiough said. “The fact that the men’s team had similar success made the season even better. Obviously Richard and I have a special bond and a great friendship that goes back more than 25 years, and as an alum of the program, I revel in any success that they achieve.”

For Nuttall, the season was all the more satisfying because he shared the success with Riddiough.

“Seeing Simon build the women’s program into what it has become makes me incredibly proud as his former coach and as a friend and colleague,” Nuttall said. “I think that having both teams successful is a benefit for all of our programs here at Hofstra and for soccer on Long Island as a whole.”

The similarities don’t end there. Each squad was led on the pitch by dynamic superstars (Leah Galton and Joseph Holland) who posted remarkable seasons that culminated with both winning Colonial Athletic Association Player of the Year honors and earning All-America accolades.

Despite being picked third in the CAA preseason coaches poll, the Pride men got off to a quick start to the 2015 campaign, winning its first four contests of the season, including a season-opening 2-1 victory over #15 Syracuse. In fact, Hofstra got off to a 6-1 start. The Pride opened conference play and added its second win against a ranked team with a 2-1 victory over #24 UNCW, sending a message to the CAA and the nation that Hofstra was a force to be reckoned with in 2015.

The Pride women, meanwhile, began the season at the Penn State Invitational, where they faced two of the top teams in the nation. The Pride was tested, dropping one-goal contests to nationally ranked Penn State (#6) and Rutgers (#24). (The Nittany Lions went on to capture the national title, while Rutgers advanced to the College Cup before falling in the national semifinals to Penn State.) After those losses, Hofstra won five straight games and eight out of nine.

Hofstra was one of 14 schools to have both soccer  programs earn berths in the NCAA Tournament.

On the women’s side, the Pride suffered just one defeat during its conference slate, going 7-1-1 in CAA regular season play. The team earned the right to host the conference tournament, a feat the men soon matched.

The men’s team won its first five CAA games, and after suffering a 1-0 loss to Charleston, the Pride defeated #10 Elon for arguably the biggest statement win of the season. That victory ultimately helped Hofstra capture the regular season CAA crown, and was the program’s first win over a top-10 program since defeating then-#7 Old Dominion in 2005.

Coach Nuttall’s squad rode that wave to a tremendous showing in the CAA Championship, not allowing a goal in consecutive 2-0 victories over James Madison and Delaware to capture the CAA crown. That showing led to Hofstra hosting a first-round home game in the NCAA Tournament, where the Pride defeated Lehigh for its third-ever NCAA Tournament victory.

Riddiough’s crew suffered a heartbreaking double-overtime loss to eventual CAA Champion James Madison in the semifinals. But the team’s outstanding season was rewarded with an at-large bid to the NCAA Tournament for the second time in program history.

Just like the men’s team, the Pride women reached the second round for the third time in their history, marking another milestone of shared success and history.

“The camaraderie between our programs starts with the coaches,” Nuttall said, “but extends to the student-athletes on both teams. I think that they are each other’s biggest fans.”