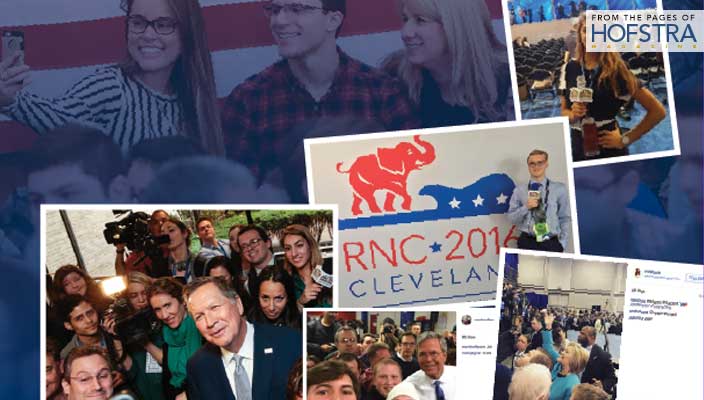 But even before the Commission on Presidential Debates announced in July that Hofstra would be a debate host, the campus community was fully engaged in the 2016 presidential election, one of the most unconventional in modern history.

In February more than 100 students and faculty traveled to New Hampshire for its first-in-the-nation primary. A few months later, during the New York Republican primary campaign, hundreds of students, faculty and community residents attended a town hall at the Student Center with Ohio Gov. John Kasich. This summer, Hofstra students were in full force at the Republican and Democratic Conventions – covering the events as reporters for WRHU-88.7 FM, Radio Hofstra University, or interning as part of a Washington Center seminar.

As excitement builds for this year’s debate, here’s a look back at the 2008 and 2012 presidential debates at Hofstra – as well as how the Hofstra community has participated in the 2016 election so far.

Around the Horn
High-Tech: The School of Engineering and Applied Science will get a new building to house its growing enrollment, thanks to a $25 million New York state grant.