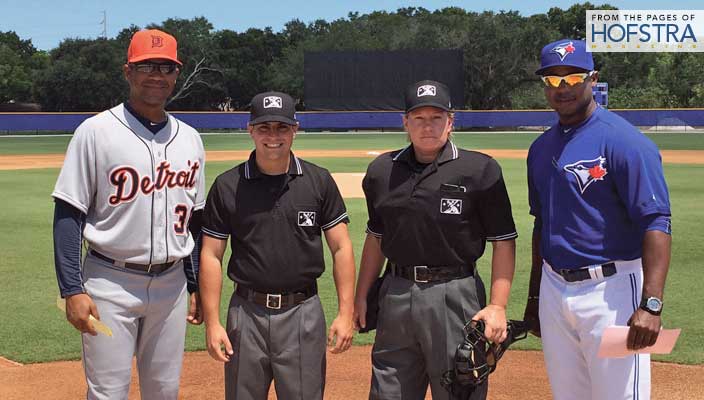 Pawol, who caught for Hofstra from 1996 to 1998, made her minor league debut in Dunedin, FL, working behind the plate for the GCL Blue Jays-GCL Tigers game. She was selected in 2015 to attend the MiLB Advanced Course, where top candidates from the Umpire Training Academy qualify for further training. Her performance in this course led to her assignment to the Gulf Coast League.

A three-time all-conference selection, Pawol was an infielder who played 161 games for the Pride, batting .332 for her career. During her career, Hofstra posted a combined 110-51 record and went 33-3 in North Atlantic/America East Conference play.

She took some time recently to reflect on her place in history, opportunities for women in sports and her second career as an artist and photographer — a passion she has pursued since she majored in painting as an undergraduate student at Hofstra.

Who was the first person you called/told when you found out you were named an umpire in MiLB?

The first person I called after receiving my invite into MiLB was John Kurnat, my mentor from the Colonial [Athletic Association] as well as 20 years in the Big Ten. John is a three-time Women’s College World Series NCAA Division I umpire and a career-long baseball umpire. We prepared extensively on a variety of topics, discussing improving every day, professionalism, game management, gender, size, hustle and conditioning that would help me train to be successful during the tryout process. John has mentored many young men and women into success umpiring within the Big Ten and into the NCAA Division I postseason. I am very grateful for the investment of time he has dedicated toward my umpire training and development. He absolutely deserved to hear the good news first!

Why do you think it’s been so long since there’s been a female MiLB umpire?

The past 10 years have been extremely prolific for women’s softball, women’s sports in general and women working in men’s sports. Women have had a lot of new choices, and perhaps umpiring hasn’t been as “attractive” when compared to all of the other new, less risky opportunities. Women’s softball has absolutely exploded with job growth for coaching, athletic training and administration positions. Also, consider the additional new career choices for all of women’s sports such as marketing, equipment, and uniform industries. Then expand this to the efforts by men’s sports administrations to include women for career positions on their staffs. There are a lot of new work opportunities!

From my personal experience within the Major League Baseball Umpire Camp tryouts, the  MiLB Umpire Training Academy, the MiLB Advanced Course and now as a current MiLB professional umpire, I can say with a 200 percent certainty that professional baseball has also been an active participant in this prolific 10-year period attracting women for career positions in baseball. When you ask specifically about umpiring, we need to step back and remember that umpiring is only fun if you love it. In general, most people (men and women) do not love it. There are not a lot of people out there who willingly choose to sign up for a career that involves the possibility of being hit by a 90+mph baseball, or traveling away from home for six months at a time, or taking on the athletic challenge of physically running on the huge baseball diamond day after day no matter that the weather, learn all of the rules and mechanics, and get all of the calls right. It takes a certain personality to want to umpire. It also takes good timing for job openings. It is very risky to go down this career path, because no one knows if they will become good enough or if a position will open for promotion before they pass their prime.

For the past three years, I have been offering beginner youth umpire training classes to help speed up the numbers process by attracting women and girls into umpiring. My classes introduce umpiring both baseball and softball to girls and boys early enough in a way that makes umpiring fun and achievable. Personally, I wish I had been introduced to umpiring while I was in college or high school. The umpire drills we do are fun and interactive. I help them with uniforms and find them plate equipment. Often, I am at the field with the new umpires as they pull their new shirts and pants right out of the wrappers from the manufacturer. We take the time to teach the basic rules and mechanics weeks before games begin. I am dedicated to exposing girls and boys to umpiring to find as many potential future umpires as possible.

Describe what you were thinking as you got ready for that first game.

I was enjoying the experience of my first day as a professional umpire. The Blue Jays were the home team, and their umpire locker room was the biggest I had ever seen dedicated to umpires. There were six huge lockers, a full double bath room, two full showers, table and chairs, laundry, towels, all kinds of sports soaps, shaving creams, hair gels, mouth washes, mirrors, sinks, refrigerator, and plenty of space for stretching out to warm up. We had everything we needed to prepare mentally and physically for the game.

Did the first batter, or the catcher, acknowledge you and the somewhat historic nature of your first game, or was it just business as usual?

We did take a commemorative photograph that included my partner, Scott Molloy, and both head coaches from the Blue Jays and Tigers. Aside from that special moment at the plate meeting, we got right into business as usual. The pitcher threw his eight warm-up pitches, the catcher threw the last one down to second base, I swept the plate, got into position as did the batter, and yelled “Play!”