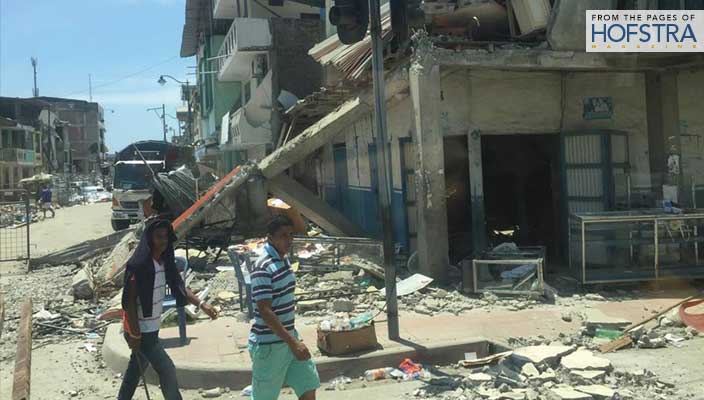 At first, she thought she was dizzy.

Then, Marissa Espinoza looked up and saw the living room chandelier swaying in her small apartment in Cumbayá, a suburb of Ecuador’s capital city, Quito.

“I heard my landlord yelling for me to come outside,” she said, “and we all went out into the street with my neighbors.”

She would soon learn that a 7.8 magnitude earthquake had struck the western coastal region of the small South American nation that day, killing more than 650 people, injuring 16,500 more, and causing widespread devastation.

Espinoza, a 2015 Hofstra graduate, was in the country on a Fulbright research grant, studying its banking system. Living in a mountain region about 100 miles from the quake’s epicenter, she escaped uninjured, but not unmoved, her experiences bringing a deep emotional resonance to her scholarly work.

Two days after the quake, Espinoza and another Fulbright student joined a relief group on a 10-hour bus ride through stalled traffic and small landslides to head into Tabuga, about 30 minutes south of Pedernales, one of the most damaged areas. There, they unloaded and distributed supplies – water, candles, matches, and toilet paper – late into the night. The next morning, they began again, giving out clothes, shoes, nonperishable food, and other necessities.

I heard my landlord yelling for me to come outside, and we all went out into  the street with my neighbors. — Marissa Espinoza ’15

“What really affected me emotionally was seeing the desperation on the faces of these families,” Espinoza said. “To see them lose what little they had was devastating.”

At Hofstra, she triple majored in economics, political science and psychology and double minored in Spanish and Latin American and Caribbean studies. The combination provided a solid interdisciplinary understanding of how politics, financial markets and public policy intersect and affect the lives of the poor and disadvantaged.

She hopes to go to law school in a few years, after a stint in the U.S. Army Reserves.

“I’d like to work in some combination of economics and law and make the playing field more equal. For a child born into poverty in South America, it doesn’t matter how smart he is, how lucky he is; he’ll never have the same opportunities as those of us in the U.S.,” she says. “Being poor in the United States is so different from being poor anywhere else in the world, and I want to help those who can’t help themselves, especially families in South America.”

Espinoza was drawn to Ecuador for reasons academic and personal.

She wanted to fill a gap in academic research about the economy of a nation that she said is “often understudied and forgotten about.” Ecuador also happens to be where her father, Patricio, was born and raised until he came to the United States in his early 20s.

“He doesn’t talk much about his upbringing,” she said, “but he always emphasizes to be grateful for what me and my brother have, to appreciate everything and not be wasteful of what we have. He tried his hardest to give us everything we wanted as kids, which I think is because he didn’t have that himself.”

Meena Bose, PhD, executive dean of the public policy and public service program at the Peter S. Kalikow School of Government, Public Policy and International Affairs, was one of several professors in the Political Science and Economics departments who helped her brainstorm and fine-tune her Fulbright study/research grant project proposal.

“Graduate study in economics in Ecuador will prepare Marissa for a career in financial policymaking, both domestic and international,” Bose wrote in her recommendation, “and she will apply what she learns to promote public policies that improve people’s lives.”

With strong competition from some 70 students who apply each year to study in Ecuador, Espinoza was one of only eight to win a spot among U.S. students.

During her eight months there, she studied the level of confidence Ecuadorians have in their banking system and how that has affected capital markets development, under the mentorship of her sponsor, Dr. Pedro Romero, an economist at La Universidad de San Francisco de Quito, a private liberal arts university. She lived and traveled on her own, finding time to go whitewater rafting on the Amazon River and ride a horse up the side of an active volcano overlooking the capital city.

She was about a month away from returning to the United States when the April 16 earthquake hit. Her experience helping in the relief efforts left a lasting mark. “The time I spent volunteering after the earthquake was more meaningful than anything else I did while I was in Ecuador, and I think more meaningful than any volunteer work I’ve ever done in my life,” she said. “You see the impact you’re making. You feel the gratitude from the families. I felt like I had a true purpose in life.”

“One of the hardest things I didn’t quite ever adjust to in Ecuador was facing the poverty every single day — and I lived in the city, whereas the poverty is just so much worse in the rural areas,” Espinoza said. “Now that I’m back home, I think I feel a greater sense of gratitude than I’ve ever felt. It’s one thing to know how people live in other parts of the world, but it’s another to live it with them. Actually being there made me know exactly what that means.”

Miked Up at WRHU
Women’s Work: Dr. Mary Anne Trasciatti Leads the Effort to Build a Memorial to the Victims of the Triangle Shirtwaist Factory Fire