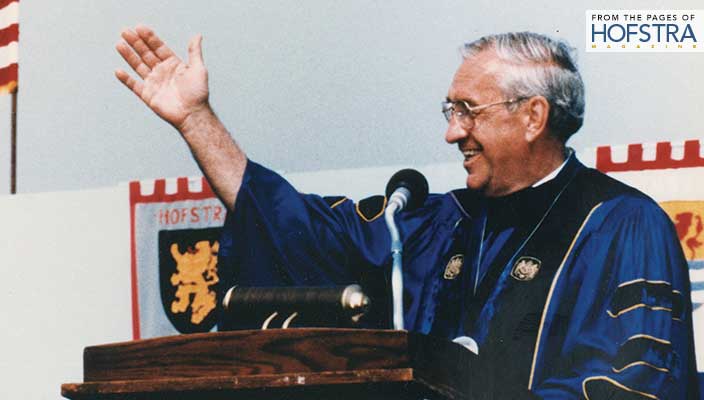 There are few people who shared a more profound bond with Hofstra University than retired President James Shuart, who died in May. Dr. Shuart loved Hofstra deeply – as a student and student-athlete, an alumnus, an admissions officer, a faculty member, a dean, a vice president and, finally, as its seventh president – a position he held from 1976 to 2001.

Dr. Shuart was the impetus for transforming Hofstra in a multitude of ways – academic programs, physical campus, cultural imprint, scholarship and endowment. He stabilized Hofstra’s finances and helped set the University on a path to national and international recognition.

Under his leadership, enrollment increased; academic offerings and library holdings more than doubled; the athletic program grew to Division I status; new facilities, buildings and wings were constructed that more than doubled the University’s physical space; the School of Communication was founded; and Hofstra became the first private university campus in the nation to be fully accessible to individuals with physical challenges. His support helped the Hofstra Cultural Center thrive and begin its presidential conference series, bringing former Presidents Ford, Carter, Bush (41) and Clinton to campus.

His legacy also can be seen in the tens of thousands of trees and tulips planted during his tenure, an effort that turned the campus into a nationally recognized arboretum.