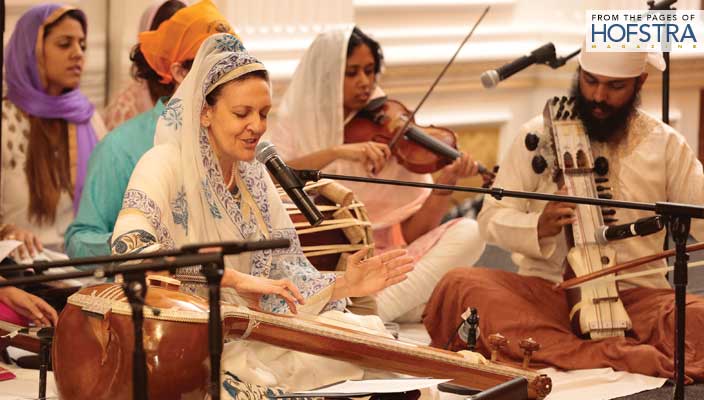 The Pluralism Project at Harvard University, created in 1991, was inspired by the increasing religious diversity of the United States, diversity that its founder and director, Diana Eck, PhD, a professor of religious studies at Harvard, saw in her classes.

Serve2Unite, a Milwaukee-based organization that focuses on youth and community outreach, was forged from tragedy, created by Pardeep Kaleka and the Sikh community after Kaleka’s father and five others were killed in a shooting at a Sikh temple in Oak Creek, Wisconsin,
in 2012.

“These two organizations use education and dialogue to promote tolerance, compassion and religious understanding. Now more than ever, I can think of no work that is more important,” said Hofstra President Stuart Rabinowitz. “Their unwavering commitment is a testament to the principles Guru Nanak represents.”

Dr. Eck and Mr. Kaleka came to campus on April 18, 2016, and participated in a panel discussion titled “Healing Hate: Taking the Challenge of Religious Pluralism.” They spent time meeting with students and explaining their research and work with the community. Later that evening, they and their organizations were honored with a reception at The Garden City Hotel.

Dr. Eck is professor of comparative religion and Indian studies, Fredric Wertham Professor of Law and Psychiatry in Society in the Faculty of Arts and Sciences, and director of The Pluralism Project at Harvard University (pluralism.org). Her work engages with the challenges of religious pluralism in an inter-religious American society that has witnessed the growth of Hindu, Buddhist, Sikh, Jain, and Zoroastrian communities. Her most recent book is India: A Sacred Geography.

“I am humbled and honored to be able to accept this on behalf of The Pluralism Project,” Eck said. “A prize offered
in the name of Guru Nanak is a very special honor indeed. I am also very pleased that we will be sharing the prize with Serve2Unite.”

Mr. Kaleka, a former Milwaukee police officer, is the eldest son of Satwant Singh Kaleka – the president of the Sikh Temple of Wisconsin, who, along with five others, was shot and killed by a white supremacist in 2012 in Oak Creek, Wisconsin. Pardeep Kaleka, now a teacher, co-founded Serve2Unite (serve2unite.org) to fight hate and violence with encounter and education.

“We at Serve2Unite are extremely honored and humbled by the award,” Kaleka said. “Serve2Unite was founded upon the same ideology that Guru Nanak established the Sikh religion upon: equality for all, regardless of caste, class, color, creed or culture. Our mission is to carry this torch of justice forward in utter defiance of fear, ignorance and hatred; to cultivate courage, wisdom, love and human kinship on our earth.”

The Guru Nanak Interfaith Prize was established in 2006 by Ishar Bindra and family and named for the founder of the Sikh religion. It is meant to encourage understanding of various religions and encourage cooperation between faith communities. Guru Nanak believed that all humans are equal, regardless of color, ethnicity, nationality or gender.

Tejinder Bindra, a member of the University’s Board of Trustees, has said of the Interfaith Prize: “The awardees may or may not be Sikh and may represent any of the multitudes of faiths or, for that matter, even no particular faith at all. It is their dedication that brings humankind to their shared destiny, common purpose and roots that they honor.”

Stepping Up to the Plate
Remembering…Dr. James M. Shuart