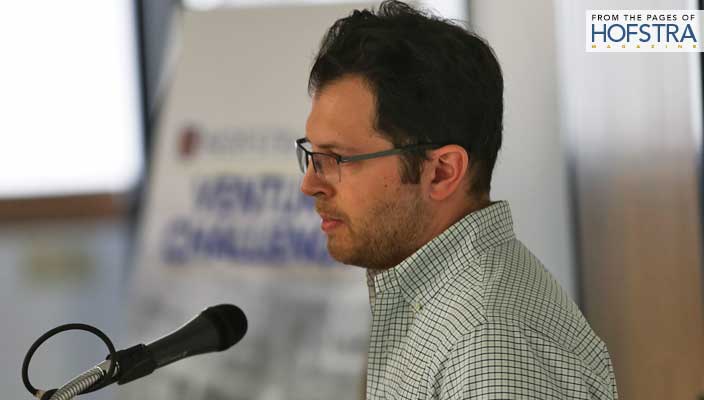 Hofstra’s new Center for Entrepreneurship injected fresh energy into the University’s startup culture this year, launching a slate of innovative programs, including Shark Tank-style competitions; mentoring by entrepreneurs; and a revamped Hofstra-CPXi Venture Challenge that drew the largest number of entries ever.

In its first year of operation, the center, under the leadership of Executive Dean Mark Lesko (former executive director of Accelerate Long Island),
created a dynamic, integrated network of faculty and industry leaders to increase students’ opportunities for firsthand experience in entrepreneurship.

The center focuses on multidisciplinary entrepreneurship support and education, leveraging the research and entrepreneurial activities at the University’s 14 schools, including the Maurice A. Deane School of Law, Frank G. Zarb School of Business, Hofstra Northwell School of Medicine, and School of Engineering and Applied Science.

Chief among the center’s programs launched this year: opening its space, called the ideaHUb; sponsoring several Shark Tank-style pitch competitions (called Lion’s Dens); and creating an Entrepreneurs-in-Residence program that brought to campus six serial entrepreneurs as mentors for students to help them develop their ideas into successful companies. The center also expanded the University’s entrepreneurship curriculum and created other business incubator programs.

The impact of the entrepreneurs-in-residence was felt almost immediately. They kept regular office hours on campus, led interactive workshops on topics such as preparing a pitch, and coached students who entered the Hofstra-CPXi Venture Challenge.

“The entrepreneurs-in-residence helped us so much,” said Anthony Avgi, a rising sophomore biology major who was on the winning undergraduate team in the 2016 Hofstra-CPXi Venture Challenge. The team won $15,000 for its proposal for a staring-contest mobile app called Look. “They gave us pointers on our presentation and our business plan. They spent so much time with us. We learned so much.”

The Hofstra-CPXi Venture Challenge, sponsored by Hofstra alumnus and trustee Mike Seiman, the founder and CEO of CPXi, drew 57 entries in 2016 – the most since the contest was launched. Students competed for a total of $42,000 in seed money for their ventures.

“These students really brought it,” Lesko said of the Venture Challenge. “The quality and the number of entries, the amount of effort these students put in, the level of professionalism – I would literally match it against any entrepreneur on Long Island.”

In the fall, the center plans another entrepreneurship competition – this one open to college students across the New York metropolitan region. The Hofstra-CPXi College Startup Challenge on Nov. 4, 2016, will offer a total of $50,000 in prize money for the best undergraduate business plans. 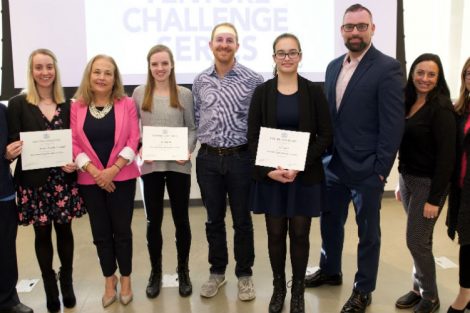