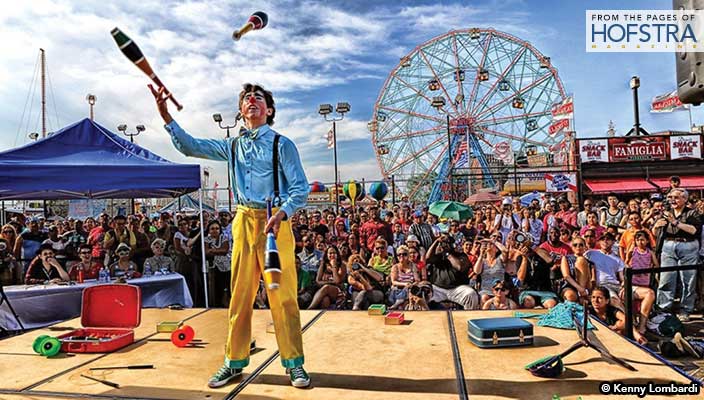 Fifteen years ago, a father applied greasepaint to his young son’s face and took him to his first juggling show.

And just like that, Matthew Lish was in the family business.

“That was the first time I was really introduced to clowning,” Lish said. “I wanted to juggle immediately after that.”

Now a sophomore mechanical engineering major, Lish has been performing with his father, Bruce, and sister, Jessica, ever since. The family entertains at pediatric wards and for organizations such as Ronald McDonald House, Autism Speaks, and the Diabetes Research Institute.

“It’s all around me. It’s what I do and who I am. Whether I’m revising scripts in between classes or sitting on my couch on a Saturday working on a trick, I’m always clowning.” – Matthew Lish ’19

This spring, the second-generation clown from Queens, NY, introduced his alter ego, “Phineas” (after Phineas Taylor (P.T.) Barnum) to classmates and professors when he performed I Think, Therefore I Clown at Hofstra.

He took the audience through the evolution of clowning and spoke about the importance of laughter.

“People don’t just love his shows – they love Matt and Phineas, as well. All of the girls were shouting ‘Marry me, Phineas!’” said Dr. Lauren Kozol, assistant dean of Honors College and one of Lish’s professors at Hofstra.

Lish has given his offbeat, nontraditional magic, music and slapstick comedy an intellectual twist. He challenges audiences with a variety of brainteasers and feeds on their confusion.

Take juggling, for example. In I Think, Therefore I Clown, he uses his mathematics background to perform an act on the physics of juggling with “not one, not two, not even five, but THREE razor-sharp knives.”

In “Shakespeare’s Favorite Card Trick” Lish pulls out his deck of cards and performs sleights of hand while reciting a poem written in The Bard’s preferred meter, iambic pentameter:

Friends, Romans, countrymen. Lend me your ears.
Alas a single deck of playing cards.
And I do love cards therefore go with me.
All different like the stars in the night sky.
Up there we gaze at their sparkly beauty.
Fifty-two red not blue but backs the same.
Plus two court jesters if you look closely.

“We spend a lot of time focusing on the negatives,” said Lish. “And as we get older, it becomes more and more rare that we just stop and laugh at something.”

If that’s not enough, Lish also holds the world record in the Record Holders Republic for juggling three clubs while bouncing on a pogo stick. He was offered a contract in September 2015 to tour with Ringling Bros. and Barnum & Bailey Circus but decided to pursue his studies at Hofstra, with the understanding that the offer still stands after graduation.

A talented musician who plays several instruments, including the piano, ukulele, and musical saw, Lish incorporates clowning into everything he does. For him, it’s like breathing.

“It’s all around me. It’s what I do and who I am,” said Lish. “Whether I’m revising scripts in between classes or sitting on my couch on a Saturday working on a trick, I’m always clowning.”

“Don’t be afraid, and don’t worry about what others think. And finally, don’t forget to practice and showcase what you have to offer.” – Matthew Lish

It is, quite literally, in his DNA.

His father, Bruce, aka Dr. Molar Magic, is a dentist by day, but has been clowning since his college days. Lish and his dad are graduates of The New York Goofs, under the direction of the former dean of Ringling Bros. and Barnum & Bailey Clown College in Sarasota, Florida. They have written and performed three original off-Broadway shows together, and they entertain at hospitals and for charitable organizations with Jessica, aka Pupperdoodle.

Lish counts Harpo Marx, Abbott and Costello, Bill Irwin (aka Mr. Noodle), Penn & Teller, and Tim Minchin among his heroes. Joel Jeske, who wrote and stars in this year’s Big Apple Circus, has served as a special mentor and teacher for Lish, helping to expand his material over the years. Lish’s inspiration, however, doesn’t always come from people. The possibilities are endless in his parents’ garage, which overflows with cool gadgets and props.

Looking toward the future, Lish plans to clown as long as possible, noting that performing will always be a part of his life. “I’m at my top when I’m on stage,” said Lish. “There’s nothing that makes me happier.”

Eventually he’d like to work as an imagineer in the design and development arm of The Walt Disney Company, combining his passion for spreading laughter with his interest in engineering.

“Take every opportunity to step outside of the everyday parameters that the world sets for you,” he said. “Don’t be afraid, and don’t worry about what others think. And finally, don’t forget to practice and showcase what you have to offer.”

Although you won’t see Lish sitting in class sporting his red nose and striped socks, you can almost always catch him at an Honors College Open Mic Night or performing at an event at Hofstra. You might even spot him in Central Park.

“There is nothing more rewarding for me,” Lish said, “than giving people that raw joy.”

High-Tech: The School of Engineering and Applied Science will get a new building to house its growing enrollment, thanks to a $25 million New York state grant.
Miked Up at WRHU