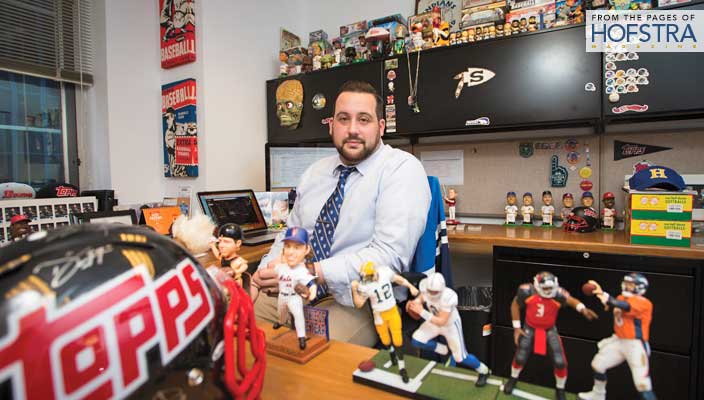 Chris Vaccaro is a manager who knows how to build a winning team: Start with a strong farm system.

Vaccaro’s team is The Topps Digital Company, where he serves as editor-in-chief. His farm system is Hofstra, where he earned a bachelor’s degree in journalism in 2007.

Tapped to lead the operations and production team of the digital division for the iconic baseball card maker in 2012, Vaccaro has assembled a staff of 18 that includes eight Hofstra alums.

There’s the baseball fanatic, Jon Hanford ’12, and the world-class authority on soccer, Chari Bayanker ’10. Katharine Haggerty ’11, ’16
is a gamer and artist, while Ed Morrone ’08 brings his background as an award-winning journalist with an eye for a good story.

“I’ve been able to build a staff of people who are hungry and excited, and want to make a difference in a company that has a historic legacy.” — Chris Vaccaro ’07

Anthony Barra and Tom Verde, both Class of 2012, worked together on New York Islanders broadcasts on WRHU-88.7 FM, Radio Hofstra University. And there’s Mike Salerno ’10, the staff’s veteran alum, and Nick Mazzarella ’16, the rookie who just started in May.

“I’ve been able to build a staff of people who are hungry and excited, and want to make a difference in a company that has a historic legacy,” said Vaccaro. “The people I’ve hired weren’t just handed jobs; I just have a great pipeline of people who know outstanding candidates who bring different strengths to the table.”

A former editor at the New York Daily News and AOL, Vaccaro initially joined Topps to manage content as the company worked on a reboot of its website. But he was quickly asked to lead its new venture creating mobile apps for digital card collecting. As editor-in-chief, he now oversees an operation that creates, designs, and markets seven trading card apps covering baseball, football, soccer, mixed martial arts, and wrestling, as well as Star Wars and The Walking Dead.

“It’s been a dream to help a historic company build its new digital team and evolve with technology and media,” he said of Topps, which began as a humble Brooklyn business that sold chewing gum in 1938 and became a leading maker of childhood favorites Bazooka chewing gum, Ring Pops and Push Pops. The company began to include free trading cards in its gum packets that featured popular TV shows and sports stars, eventually growing into the nation’s No. 1 producer of sports and pop culture collectible trading cards.

“I love working for Chris. You’d be hard-pressed to find someone who works as hard as he does, and his ambition is contagious. When he’s fired up about something, I become fired up about it.” — Nick Mazzarella ’16

Now, thanks to the work of Vaccaro and team, Topps Digital is the company’s fastest-growing division, producing some of the most popular and top-grossing sports and entertainment trading card apps in the world. Fans have “opened” more than 425 million card packs and collected more than 3 billion cards across Topps’ digital platforms.

One look at their Lower Manhattan office, and it’s clear that Vaccaro and his staff have a passion for collecting in all forms.

More than 60 boxes of trading cards sit in foot-high stacks along the top of a cabinet in Vaccaro’s office, and framed player posters lean against the window. There are autographed footballs and commemorative baseballs, even a Mets Pez dispenser. Oh – and the bobbleheads. More than 100 of them – on his desk, on the shelves, and along the radiator. And those are just the ones he keeps at the office. The most prized bobbleheads in his collection of more than 500 are at home, including the custom-made bride and groom that topped his wedding cake and was featured on ESPN’s Mike & Mike.

He’s also amassed more than 50,000 baseball cards since age 5, when he first remembers going to card shows and hobby shops with
his father in search of Mike Piazza and Cal Ripken Jr. cards and memorabilia.

And like all collectors, the team at Topps Digital is always up for a good trade.

That’s how Vaccaro got the Hofstra baseball cap signed by New York Yankees color commentator Ken Singleton that sits on his shelf. (Singleton played for the Pride and went on to win a World Series with the Baltimore Orioles in 1983.)

“Penmanship is hard to come by these days, but each of these players had a good-looking signature,” said Hanford, explaining the transaction. “Hendrick [a major league outfielder] in particular has a reputation for being one of the toughest autographs to obtain in person, so I wanted to add these cards to my collection.”

“The signed cap … was unique and cool for anyone who loves Hofstra history,” he said. “Sentimentally the trade was pretty even,
but objectively speaking, I definitely got the better deal!”

Hanford was a production assistant at MLB.com before he joined Topps last year. He sits directly across from Salerno, who was hired in 2013. Both are producers for Topps’ baseball app, BUNT. Salerno never knew Vaccaro at Hofstra; the two met when Salerno freelanced for Vaccaro at AOL’s Patch.com.

Bayanker came on board in 2014 to work on KICK, the company’s global soccer app, and Morrone was recruited the following year to work on the football app HUDDLE.

“Ed has a knack for storytelling, and his ability to turn ideas into card sets and themes is top-notch,” Vaccaro said of his former co-sports editor at The Hofstra Chronicle.

Vaccaro met Hanford and Mazzarella when they were students in his class at The Lawrence Herbert School of Communication, where he has taught evening classes for the last six years on advanced news writing and reporting, media ethics, copyediting, and digital media.

Mazzarella is the first Hofstra alum to have worked at Topps as an intern and part-time producer before being offered a full-time job as an associate producer for the just-released wrestling and UFC apps, Topps UFC KNOCKOUT and Topps WWE SLAM.

“I didn’t even know app producing was a thing before I became involved with Topps,” Mazzarella said. “I jumped at the opportunity that Chris presented to me, and I’m very appreciative of the fact that I have a job right out of college.”

“I love working for Chris. You’d be hard-pressed to find someone who works as hard as he does, and his ambition is contagious. When he’s fired up about something, I become fired up about it,” Mazzarella said. “I can’t imagine there’s a group that’s more fun to be around. There’s great camaraderie among the team.”

Vaccaro often reminds his students to be prepared and open to new career possibilities, citing his own experience as an example.

“When Topps launched its first mobile app in 2012, the stars really aligned for me because I was the only one there who really knew content, sports, and baseball cards,” he said. “I was also able to apply my previous experiences in media, and we were able to turn the project into something we could have never expected.”

“If you look at my resume and career trajectory, I have a degree in print journalism, and all I wanted to be at one point was a sports writer,” he said. “I started in newspapers, but then I went to online, and from that I went to mobile, so I always tell my students it’s all about knowledge meeting opportunity at every step of my career.”

Vaccaro chose Hofstra after his freshman English teacher at Sachem High School inspired him to pursue journalism. “I fell in love with writing and telling stories about sports,” he said. “And I wanted to go to a college that had both a Division I sports program that I could write about and also a strong journalism program.”

His college experience was largely rooted in The Chronicle. “Story budgets, doing layouts, staying late on deadline nights — those are my favorite memories.”

Since the start of his career, Vaccaro has written five books on Long Island sports history (including one about Hofstra athletics), and his byline has appeared in more than 200 media outlets, including ESPN, Sports Illustrated, The Associated Press, Newsday, and The Philadelphia Inquirer. A lifelong New York Islanders hockey fan, he was thrilled when Rolling Stone assigned him to cover the team’s last game at the Nassau Coliseum, in April 2015. (His 18-month-old son, Hunter, with wife Theresa, is named after famed Rolling Stone writer Hunter S. Thompson.)

Vaccaro is also the president of the Press Club of Long Island (PCLI), and helped found its Long Island Hall of Fame initiative, which honors local journalists. Under his leadership, PCLI was recognized as a two-time national runner-up for the Society of Professional Journalists’ Chapter of the Year. He also relaunched the Herbert School’s SPJ student chapter, which was dormant for a decade, and is a member of its alumni association executive committee.

“Chris was always one step ahead of me in class,” said Carol Fletcher, associate professor and chair of the Department of Journalism, Media Studies and Public Relations, who taught Vaccaro as an undergraduate. “Even back then, he was incredibly productive, freelancing for a range of magazines, writing books, you name it. He has the same tremendous energy and creativity now, and is much loved by students and has so enriched their experiences here.”

Earlier this year, Vaccaro was named one of Long Island Business News’ “40 Under 40,” a roster of rising local leaders in business, government, education, and the nonprofit sector.

“I’m living and breathing what I love and what I’m teaching my students,” he said. “It doesn’t get any better.”