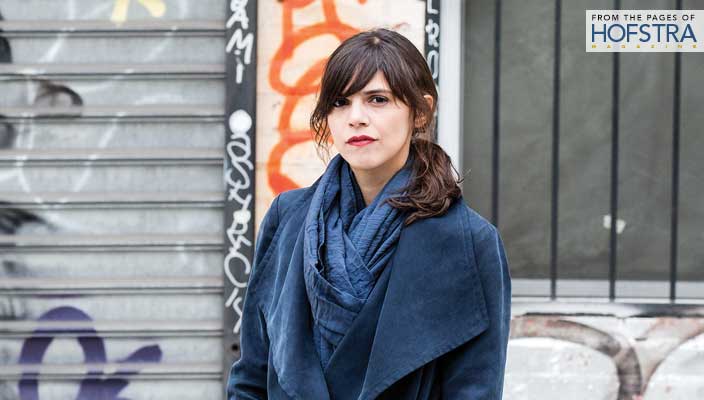 A profile in Vogue, a Los Angeles Times Book Prize and inspiring a new student community service club are just a few of the ways Dr. Valeria Luiselli marked her first year in Hofstra’s Department of Romance Languages and Literatures.

Luiselli was awarded the coveted Los Angeles Times Book Prize for fiction in spring 2016 for her second novel, The Story of My Teeth. The award came on the heels of a nomination for a National Book Critics Circle Award (NBCC), making Luiselli the first author of Mexican heritage to receive that recognition for a work of fiction. The Story of My Teeth follows the adventures of Highway, a legendary auctioneer, whose most precious possessions are the teeth of the “notorious infamous” such as Plato, Petrarch and Virginia Woolf.

The Story of My Teeth was praised as one of the best books of 2015 by a litany of highly regarded literary critics from NPR, The Guardian, Publisher’s Weekly, Kirkus Reviews, BuzzFeed, The Huffington Post, and the San Francisco Chronicle. In September 2015 The New York Times praised Luiselli “for the fresh approach she brings to fiction, one that invites participation and reaction, even skepticism — a living, breathing map.”

The significance of having been nominated for the NBCC in fiction was not lost on Luiselli. “Only two other foreign writers, [Roberto] Bolaño and [W.G.] Sebald – two of my literary heroes – have won the prize, so I knew it would be difficult to join them in that constellation. But I think it’s important to note that they won well into the 21st century. The U.S. literary sphere is becoming much more open to what is going on in the world. It is much more integrated, less insular. More books and translations are receiving this kind of attention.”

When asked about her inspirations, Luiselli, who was born in Mexico City and raised in South Africa, says, “Every novel I write, every book I write is a completely different adventure. There are some overlapping preoccupations, questions and explorations, but every book I’ve written is an entirely different journey. Perhaps a couple of different themes or strings in common would be the question of displacement and how people who are displaced from their original context have to reinvent their identities.”

Luiselli, who is fluent in Spanish and English, and able to communicate ably in five languages, adds, “Another one of my obsessions is translation and multilingualism. I write bilingually, and must – at some point in my work – rewrite into just one language. Similarly, I explore characters who are between languages and have to translate in their everyday life – literally and figuratively.”

The subject of language and translation in literature is one that Hofstra will tackle this fall, when longtime Hofstra professor and poet Miguel-Angel Zapata and Luiselli’s husband, author Álvaro Enrigue, participate in the Hofstra Cultural Center symposium On the Edge of Creation and Translation (Hispanic-American Writers and Scholars on Translation). Enrigue, like his wife, is an acclaimed author whose fifth novel (and first to be translated into English), Sudden Death, was published in early 2016 to high praise from The New York Times, Los Angeles Times, and The Wall Street Journal.

“The relationship between an author and translator is the relationship between two human beings,” says Luiselli, whose translator on The Story of My Teeth and Faces in the Crowd was Christina MacSweeney. “Ours has been a relationship of intense collaboration. I think we immediately understood each other when we started working on my first book. I gave her a lot of freedom to start suggesting ways of phrasing my sentences, and she gave me the freedom to rewrite a lot of my work directly into English. I managed to bring what she produced closer to my voice, and we had a very intense exchange.

“Good translators have a good ear. They are able to emulate tones and rhythms. As our relationship has become stronger, she was able to bring her English closer to mine. In time, her written English also started influencing the way I write. It’s a very deep relationship in many ways.”

When her students ask Luiselli for guidance on their own writing, she says, “I am careful because what works for one person may not work for someone else. I prefer to give less prescriptive and intrusive advice.

And writing is not the only thing she’s helped her students learn. Her stories about her own volunteer work as a local court interpreter for immigrant children on Long Island led students in her Spanish conversation class to create La TIIA (Teen Immigrant Integration Association), a new student club to mentor local Latino youths in middle and high school.

“That’s where everything started – we got to choose what we wanted to talk about, so long as we as we were talking in Spanish, and we started talking a lot about immigration,” said Amanda Moncado, a rising senior from Elmont, N.Y., double-majoring in education and Spanish.

“From watching documentaries and reading newspaper stories and hearing her experiences – we thought – ‘maybe we could do something,’ ” Moncado said. “But as students we didn’t know what to do. OK, we want to help, but how? There are so many immigrants on Long Island and near Hofstra. So then we started talking in class – and she asked us, ‘what do you think about starting a club?’ ”

Luiselli became the club’s advisor, helping them research and determine exactly who they wanted to help and how. More than anything else, Moncado said, Luiselli served as a sounding board and cheerleader whenever the club founders grew discouraged or overwhelmed.

“Sometimes being a student and starting a club, you think, ‘who’s going to want to join this?’ but she’s super-positive
and very motivational. She would always tell us, ‘this is going to be worth it, stick with it.’ She’s 100 percent involved. Without her help, we couldn’t have gotten this far.”

Well-Healed
Around the Horn