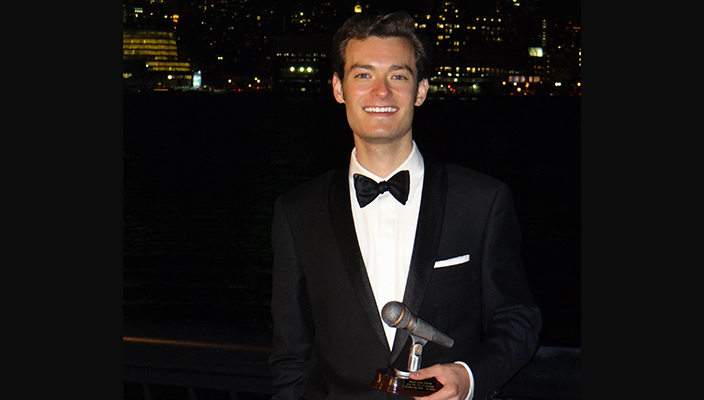 Hofstra junior Zack Alexander won the city of Hoboken, NJ’s 10th annual Sinatra Idol Contest on June 9, receiving a perfect score from a panel of judges for his rendition of “I’ve Got You Under My Skin.” He competed against 15 other performers who came from as far away as Florida and California to channel Sinatra in the legendary singer’s hometown.

The Video/Television major from Red Bank, NJ, says he’s been listening to the music of Ol’ Blue Eyes since he started high school and performing in public for the last few years. “‘Summer Wind’ was the first song of Sinatra’s that I heard and that’s what got me into the music. That song, and ‘I’ve Got You Under My Skin’ are my favorites,” says Zack.

Though his music may be considered of another era, Zack feels it is an honor to pay homage to Frank Sinatra, who continues to be celebrated as one of the most important entertainers of the 20th century. “Frank Sinatra’s music is timeless for many reasons, yet one reason stands out among the rest,” says Zack. “The messages and stories of love and human emotion that he conveys through his music is something everyone can relate to. I believe people of all ages can appreciate that. The Great American Songbook is something that I have a passion for preserving because it is just that, great American music.”