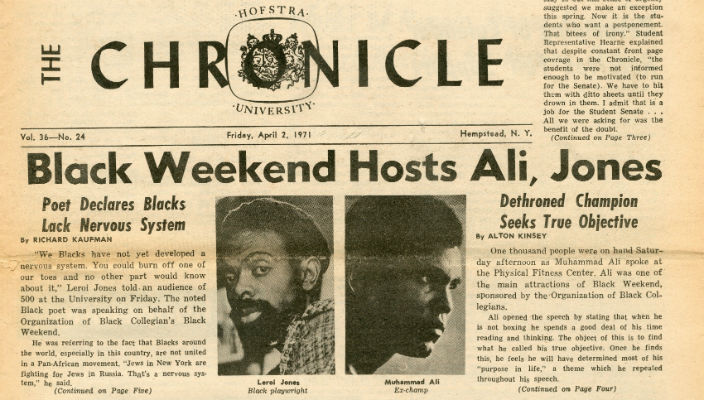 As boxing great Muhammad Ali is laid to rest today, WRHU 88.7 FM Radio Hofstra University Professional-in-Residence Ed Ingles, a legendary sports broadcaster who knew Ali and covered many of his fights, shared his remembrances of “the most interesting and courageous athlete” he’s ever known.

“He was a great boxer, but he was also a complex man who spoke out and changed the way people thought about race in particular,” Ingles said of Ali, a heavyweight champion, Olympic gold medalist and activist who died June 3 at age 74 after a long battle with Parkinson’s Disease.  “He had a mission to make people understand and respect each other. Many people didn’t like him, but toward the end of his career, many people realized what depth he had.”

“He was also a fun-loving guy too with a great sense of humor, especially in the early years,” he added. Once, during a press luncheon at the Waldorf Astoria during the prime of his career, Ali made a little drawing on a napkin and leaned over to hand it to Ingles, telling him it was for him.  “I still have that napkin,” says Ingles, whose own career spans more than 40 years including 24 years as sports director and morning drive time sports update anchor at WCBS 880 AM in New York City.

Ali visited the Hofstra campus in April 1971, where more than a thousand people attended a talk he gave as part of Black Weekend, sponsored by the Organization of Black Collegians (see featured image above).

Ali left a lasting legacy of inspiration for many people, particularly Black Americans, according to Ingles. “When he won that gold medal in Rome, he set a pathway for so many people who realized that they too didn’t need to settle, they could achieve greatness in their own lives.”

“When he saw injustice, he was not afraid to speak out.  He was certainly a very polarizing figure, but we don’t have that today in sports,” said Ingles. “Have we ever revered another boxer like this? If Muhammad Ali was in his prime today, he’d have a lot to say about many of the things happening in the world. Maybe that’s what we’ll miss most about him. “

Read: The Hofstra Chronicle interviewed Ingles at depth about Ali in 2008.

See photos and watch this clip of Ali’s daughter, Maryum, talking about her father’s impact on her life during the Hofstra conference, “The Greatest: From Cassius Clay to Muhammad Ali”: