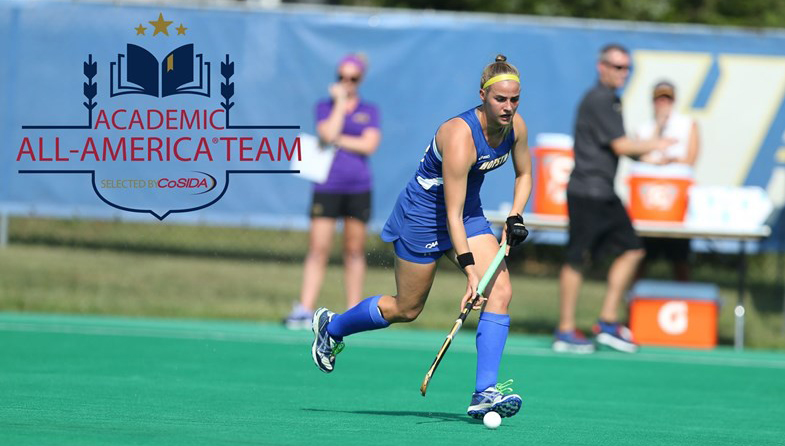 Schoen, a forward on the Pride Field Hockey team, becomes Hofstra’s 31st ever CoSIDA Academic All-American and the first since Steve Bonanno (wrestling), Joe Burg (baseball) and Olivia Galati (softball) were all first team selections during the 2012-13 year.

“In what continues to be an amazing time for Hofstra student-athletes in the classroom, on their respective fields of play and in the community, Stella represents the best of the best,” commented Hofstra Vice President and Director of Athletics Jeffrey A. Hathaway. “She has achieved greatness in all areas of her student-athlete experience and joins an elite group of athletes nationwide to be called a CoSIDA Academic All-American. All of us in the Hofstra community salute her outstanding academic achievements.”

Schoen, a forward on the Hofstra Field Hockey team, was one of 15 student-athletes named to the Academic All-America second team from a ballot that consisted of academic all-district selections from around the country. The women’s at-large sports include: beach volleyball, bowling, crew/rowing, fencing, field hockey, golf, gymnastics, ice hockey, lacrosse, rifle, skiing, swimming, tennis and water polo.

A Hamburg, Germany, native, Schoen owns a perfect 4.0 grade point average while majoring in economics with a minor in psychology. She has been a member of the Provost’s List in all six of her semesters.

On the field, Schoen earned first team All-CAA and second team All-Mideast Region accolades in 2015 after finishing second in the CAA with 17 goals and 41 points. She was also 10th in assists with seven.

Since becoming Division I in 1970, 11 Hofstra student-athletes have earned Academic All-American first team honors, 14 have been named to the second team and six have been chosen to the third team.