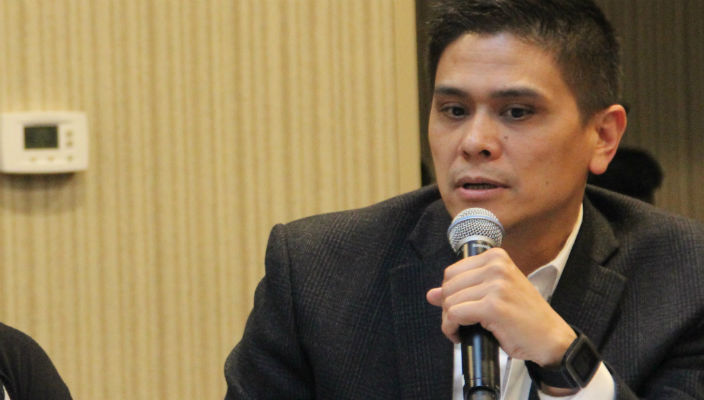 Assistant Professor of Rhetoric Andrew Spieldenner, PhD, was among a group of HIV activists who met recently with Senator Bernie Sanders to ask for stronger commitments from presidential candidates in dealing with the social, financial and economic factors that contribute to the HIV epidemic in the United States.

Dr. Spieldenner attended the meeting as co-secretary of the US People Living with HIV (PLHIV) Caucus, which belongs to larger coalition that advocates for people with HIV.  He and 18 others met with Senator Sanders in San Bernardino, California, on May 25th while other members of the coalition met with Hillary Clinton earlier in the month.  The group has extended an invitation to Republican nominee Donald Trump as well.

“I was really impressed with Senator Sanders’ humility at points,” said Dr. Spieldenner. “He  admitted that he didn’t know some things about HIV, particularly about transgender populations, and he wanted to know more. He is obsessed with pharma and drug pricing, which is a valid concern, but HIV is more than a medical condition and I hope that he got that message.”

“The Senator shook everyone’s hand and called us by name, and was a very personable and affable man,” he added.  “His LGBT community liaison and his Latino community liaison are amazing people and really worked to make sure that the meeting happened and that our voices were heard.”

The PLHIV has pressed the White House hopefuls to respond to HIV as a human rights crisis, asking them to address HIV at the Democratic National Convention and include HIV leaders in potential transition teams and administrations, among other things.