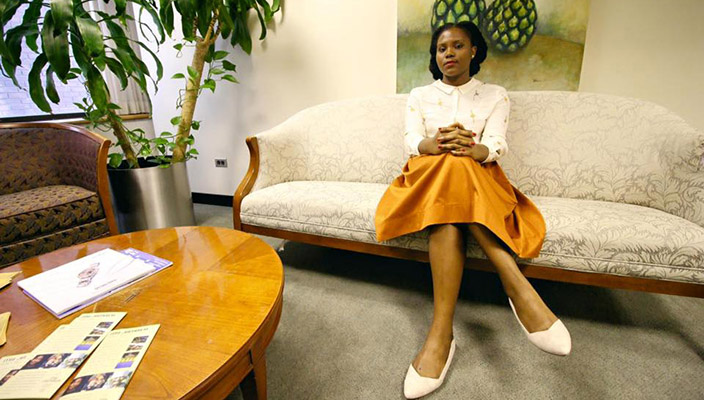 May ’16 graduates Shabieko Ivy and Alexandra Phipps delivered papers earlier this spring at the third biennial undergraduate research conference of the Latin American and Caribbean Area Studies (LACAS) Program at Binghamton University. Ivy and Phipps, anthropology majors and students in Professor John Pulis’ anthropological theory class, are both from Jamaica, and researched and presented topics related to the island.

Shabieko Ivy’s paper, “Look for Me in the Whirlwind”: Marcus Garvey Still Remains Relevant in the 21st Century and Beyond,” focused on a rethinking of social activist Marcus Garvey and his United Negro Improvement Association (UNIA) of the 1920s.

Ivy says her paper, “builds on a message of racial pride, self-confidence, unity and self-governance, to achieve and maintain prosperity. The teachings of Garvey look beyond skin color. His methods can be used by any individual, community or nation looking to uplift themselves.”

As a Hofstra student, Ivy served as public relations officer for the Student Government Association. She has worked for the Consulate General of Jamaica and served as a youth ambassador at International Young Leaders Assembly (IYLA).  Ivy will intern for Council Member Jumaane D. Williams at the New York City Council this summer. She hopes to one day create a non-profit organization for girls in Jamaica and foster a mindset in them “so that they too can become the best versions of themselves.”  Her future plans includes attending law school, and furthering her interest in the political development proceedings of Jamaica, the United States and the international community.

Alexandra Phipps, who added majors in global studies and geography to her studies, researched The White Witch of Rose Hall. Rose Hall is a plantation in Jamaica believed to be haunted, because the lady of the estate, Annie Palmer, is rumored to have killed anywhere from five to seven of her husbands and many male slaves who were lovers. Phipps argues that the passing down of this story reflects a “post-colonial Stockholm syndrome.” She writes, “The story of The White Witch of Rose Hall or Annie Palmer serves as a figure through which we can analyze many elements of contemporary Jamaican culture and the colonial dynamics of recently independent nations. The story of Annie Palmer is about slavery, resistance, and, feminism. … Upon entering the great house, black Jamaican women wearing what is often referred to, as traditional clothing escort visitors on a tour of the estate. The referenced tradition is that of having slaves or indentured servants in the home or plantation. This reflects what I call a post-colonial Stockholm syndrome, an echoing of the social, cultural, and economic dependency that post-colonial nations experience once gaining independence.”

During her time at Hofstra, Phipps was a fellow for Hofstra’s Center for Civic Engagement and president of the Anthropology Club. She held internships at the United Nations and with the ​magazines, Swanky Retreats and Caribbean Living.