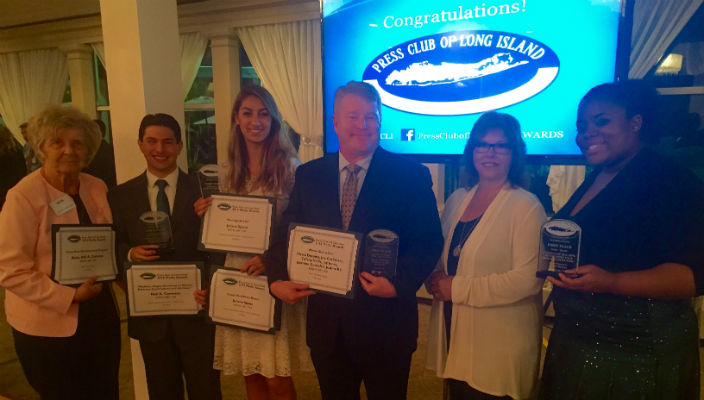 WRHU’s student journalists won awards in both professional and student radio categories including:

2nd place – “Madeline Singas, Democrat on District Attorney Qualifications and the Issues” by Neil A. Carousso

1st place – “A League of Our Own: Do You Know Your Breast Cancer Risk?” by Arielle Burton and WRHU community volunteer Fran Spencer

1st place – “Bully Beware: There’s An App for That!” by Justine Re

Alumni who also won awards include Vicky Whitaker’62, a former president of PCLI who was inducted into its 2016 Journalism Hall of Fame, as well as Tara Conry, Ann Parry, Jed Morey, and Rashed Mian.

Faculty winners include adjunct professors Scott Brinton, who won first place for commentary and third place for narrative in the Merrick Herald, and Chris Vaccaro, whose article in Rolling Stone placed second for sports feature writing.   Vaccaro, a 2007 alum, also serves as the current president of PCLI, which is one of the largest local chapters of the Society of Professional Journalists.