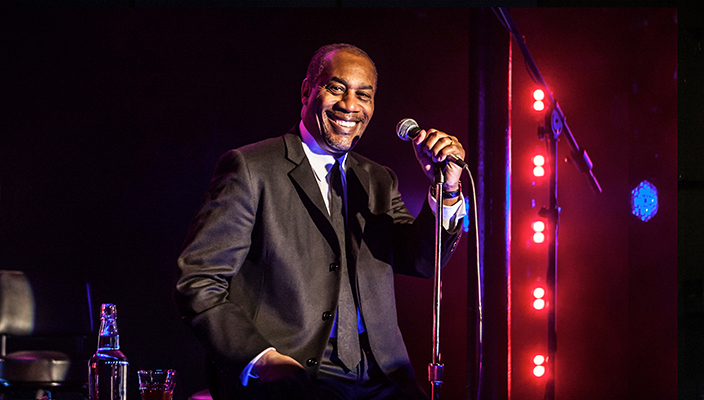 Hofstra drama alumnus Joe Morton is spending his summer vacation at off-Broadway’s Westside Theatre, playing comedian turned civil rights activist Dick Gregory in the play, Turn Me Loose, co-produced by John Legend. Playing this visionary – whose insight and knowledge inspired celebrities and leaders in the arts, civil rights, government, economics and nutrition –  may seem a departure for Morton, who has been enjoying the accolades he has been receiving since 2013 for his role as the villainous Rowan (“Papa”) Pope on the hit ABC series Scandal. But Morton is no stranger to the stage, and his career has richly spanned all the performance genres – theater, film and television – for more than four decades.

Morton talked to News@Hofstra about Turn Me Loose, Scandal, and Justice League, and even shared advice with newly graduated and current drama students.

News@Hofstra: How does it feel to be back in the New York theater scene?

Joe Morton: To be back on the stage and in New York is exquisite. I love walking the streets. I love the atmosphere of the city and the audiences who come to see the show. It is a great feeling to be doing this play, particularly in New York at one of the best off-Broadway theaters – the Westside. It’s been uplifting.

N@Hof: What drew you to Turn Me Loose, and why do you think Dick Gregory’s life is one audiences ought to know?

He’s a man who gave up his career at a point when he was making the most money and when he was at his most famous. He decided to leave that all behind to come completely involved in the civil rights movement of the ’60s. These qualities make him a very complicated, very interesting, fascinating individual to play.

N@Hof: What has the transition been like for you – moving from an ensemble television series to an intimate theater production? Each also has a very different approach to portraying political themes.

JM: Turn Me Loose is essentially a one-man show, though there is a wonderful actor, John Carlin, who is with me onstage in a variety of small parts. Dick Gregory, obviously, is nothing like Rowan. This is a play about real politics and real things that have to be dealt with, whereas Scandal – that’s all very quasi. Some of it is allegorical, but overall it’s a fictitious view of a political world.

Turn Me Loose is about a real world and a real man who’s still alive. There’s a responsibility to support his truth.

N@Hof: A lot of our students know you best for your role on Scandal. What’s your approach to Rowan? Do you think he’s a good father?

JM: I think he thinks he’s the best possible father he could be. Whatever he does, he has Olivia’s (Kerry Washington) best interests at heart. His methods may be the kinds of things people find deplorable or shady, but as far as he’s concerned he’s doing everything and anything he can to put his daughter in the kind of situation that will benefit her at all times.

N@Hof: Your fans love the emotional monologues you deliver. How do you psyche yourself up for these? Are they exhausting?

JM: I’m somewhat emotionally exhausted after Turn Me Loose, because it’s an hour and a half of being onstage. But doing a monologue on a television show – it’s exciting, it’s fun. But it’s only one scene of many in the show. The preparation is shorter. The hope is that I understand the emotion going in, so that when we start to shoot I can deliver it again and again, building on it each time we take it from a different angle or make whatever adjustments the director wants. They’re very serious monologues so performing them is probably the closest I’ve been to doing something theatrical and cinematic at the same time.

N@Hof: We’ve noticed that you are very active on social media. Is that something you enjoy?

JM: We tweet live during the broadcast of Scandal. There are times when social media feels more like work than fun, but I do enjoy it, and I didn’t really get involved with it until Scandal – when I realized everyone else was tweeting live, I thought I should probably join the club. It’s the closest a television or film actor can get to a direct response from the audience as they are viewing the work.

N@Hof: Earlier this spring you played another well-known dad – Cyborg’s father in Batman vs. Superman. Can audiences expect to see more of you in the upcoming Justice League movie?

JM: Yes, Silas Stone will be back in Justice League.

N@Hof: There are some parallels, because audiences also know you as the man who created the Terminator in Terminator II.

JM: I think the role was offered because people know me as the character who created the Terminator, so now I’m creating Cyborg. And that’s great. That’s a great blessing in terms of pathways. In this business you begin to realize one thing sort of leads up to the next. Having done Brother From Another Planet [1984] probably helped me get Terminator. And having done Terminator probably helped me get Silas Stone in Justice League.

N@Hof: Your career has been very enviable – you have had success on stage, television and film – and you have had the opportunity to play all types of characters, heroes, villains, in musicals, science fiction, drama, comedy. To what do you attribute your success and what advice would you offer our current drama students?

JM: When I was at Hofstra, the one thing they were teaching us about was how to make choices. Not only the choices you make in terms of the character you are playing or particular scripts you’re dealing with, but also, do I even want to be part of this story? The tendency for many actors is to audition for anything and everything they can – which may be a way to get started and get your feet wet – but I think the sooner actors can make choices about the kind of work they want to do, the better.

It’s like painters and dancers and novelists. They all, very early on, decide what kind of work and what trajectory they want to put themselves on. Very often actors leave things up to fate and audition for comedies and dramas and classical and musicals, hoping something will stick, as opposed to deciding, ‘what is it I want to do and how is it I want to start?’

I came out of Hofstra in the late ‘60s, when a lot of black actors were working in roles as drug dealers and other stereotypical parts. I made a very clear and very deliberate decision that wasn’t the kind of work I wanted to do. I could sing, so I was able to do musicals as a way of getting my Equity card and starting my career out that way. Once that peaked, and once I thought this is no longer what I’m interested in doing and I’ve reached the top of this particular genre of theater, I went back to doing regional theater so I could build a dramatic resume, so I could be taken more seriously as a dramatic actor. I then proceeded from there.

Audiences can see Joe Morton in Turn Me Loose at the Westside Theatre through July 3. Morton doesn’t read his own reviews, but the play has received raves from The New York Times, Newsday, The New York Post, Broadway World, The Hollywood Reporter, The New York Daily News, among others. For more information visit turnmelooseplay.com.