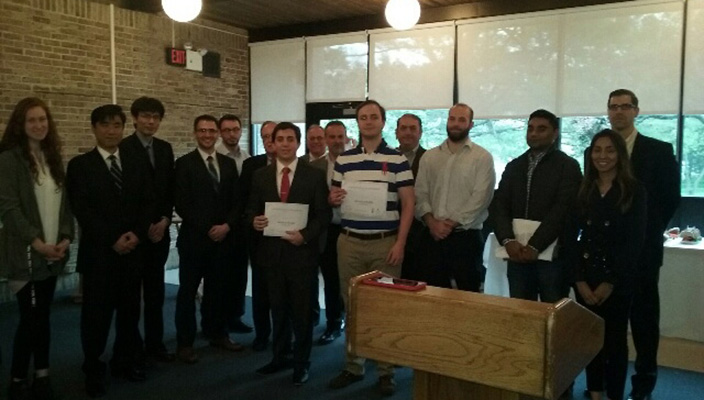 Years of research, invention and critical thinking had their moment in the spotlight when 34 seniors from the School of Engineering and Applied Science participated in the Senior Showcase on May 5. Their capstone projects, part of the SEAS curriculum, were judged by professionals in the field – 20 engineers and computer scientists (including three SEAS alumni) who work for companies that are also Hofstra co-op partners.

A student’s capstone project demonstrates the culmination of four years of engineering or computer science education. A project might be an invention, the development of a service or an independent research project that addresses a real world need. According to SEAS Dean Sina Rabbany, the projects ought to prompt students “to think critically, solve challenging problems, and develop skills such as oral communication, public speaking, research skills, and goal setting.

“Capstone projects also tend to encourage students to connect their projects to community issues or problems, and to integrate outside-of-school learning experiences, including activities such as interviews, scientific observations, or internships.”

The Senior Showcase was an all-day affair. For the first part of the day, student gave oral presentations about their projects to an audience of SEAS faculty and students. Later in the afternoon, they assembled their posters and prototypes at the Plaza Room East in the Mack Student Center where the outside judges interviewed the students one-on-one through six rounds. After each interview the judges scored the project, the student’s ability to explain it, and what the student learned from the experience.