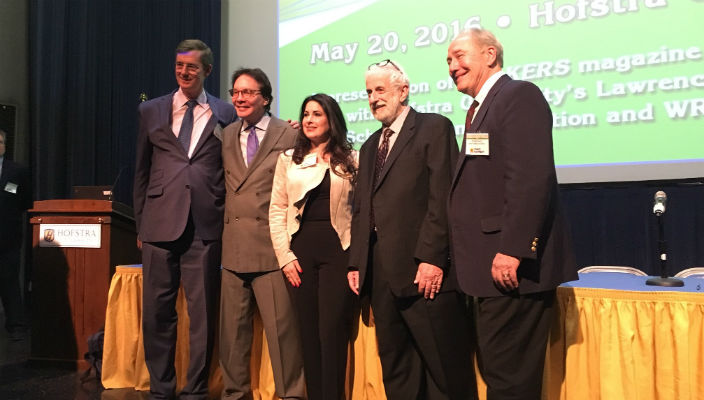 Michael Harrison, publisher of radio industry trade publication Talkers and a 1971 alumnus, presented a generous gift to the Lawrence Herbert School of Communication to help support its radio station and student-centered programs and initiatives.  The gift was made on behalf of Goodphone Communications, Inc., the multimedia firm that manages Talkers.

Harrison presented the donation to Herbert School Dean Evan Cornog before an audience in the Student Center Theater, where they both participated in a panel discussion on the future of talk radio.  The panel was part of a national industry conference, “Talkers 2016: Bridging the Generations,” on May 20,  that featured media professionals from across the country including Premiere Network and Fox News Channel’s Sean Hannity  and WFAN’s Mike Francesa.

“I find that every year my degree from Hofstra goes up in value as the reputation of the school increases,” Harrison said.  “It’s a wonderful thing to see, and it’s measurable. Coming back here and doing this major national convention where some of the biggest leaders in the business are talking about issues that are very pressing and to mingle with students is great.”

The contribution from Goodphone Communications will help support WRHU 88.7 FM Radio Hofstra University, ranked by The Princeton Review as the nation’s best college radio station for two years running, as well as the Student Experience Fund for programs that foster personal and professional growth outside of the classroom.  These programs include study abroad, research projects, internships, academic conferences, professional events and student organization activities.

More than 250 on-air talent, producers, and executives from major markets across the nation, as well as student staffers from WRHU, gathered at the all-day conference to discuss topics such as millennials and talk media, conservative politics, podcasting, and generating revenue in the digital era.

“As someone who has been to several radio and TV media conferences, I think Talkers has one of the best,” said rising senior Neil Carousso, an executive producer and host of WRHU’s Morning Wake-Up Call and an anchor and reporter of its afternoon news program, Newsline.  “I always learn a lot about topics such as monetizing digital content, which has proven very difficult, and learning how to best position oneself as a brand in this industry.”

WFAN sports radio host Mike Francesa did a five-hour live broadcast of his show from the WRHU studios on campus, where he chatted with Hofstra President Stuart Rabinowitz and men’s basketball Coach Joe Mihalich, and also conducted rapid-fire interviews with WRHU student journalists, asking them about their career aspirations and prompting on-the-spot auditions for sports updates and commentary.

“You guys are good,” Francesa told the students. “You don’t fall apart when I give you this stuff! Good job.”

Connor Giblin’17, sports director for WRHU, said of the experience: “Being on-air with Mike Francesa was a dream come true.  I grew up listening to Mike when I was younger, so it was incredible to get a few minutes with him on the biggest sports radio station in the world.  It was nerve wracking at first, but I felt comfortable with what I was saying.  My dad was listening and he told me that his coworkers and friends were listening and were very impressed. Overall, the opportunity was phenomenal.”

See photos from the day’s sessions and networking luncheon, as well as Mike Francesa’s broadcast from WRHU.