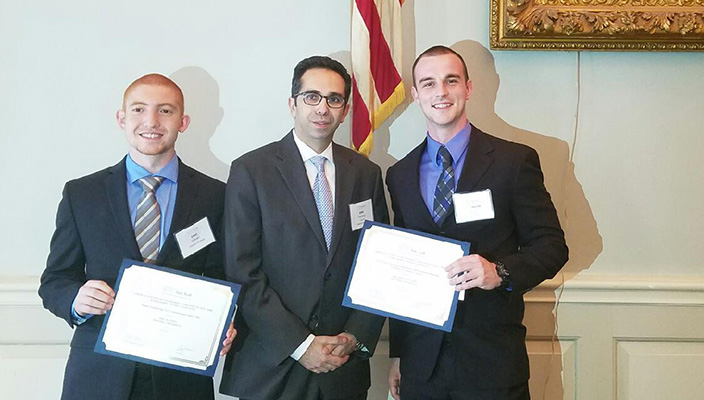 Hofstra mechanical engineering majors Brandon Sinclair and Eric Katzen were awarded scholarships by the American Council of Engineering Companies of New York (ACEC) and were honored earlier this week at the organization’s membership luncheon at the Union League Club. ACEC awards the scholarships based on students’ cumulative grade-point average, college activities, work experience and essays on consulting engineering. Only 23 engineering students in New York state received these competitive scholarships.

Brandon Sinclair, a senior from Central Valley, NY, was awarded the ACEC New York Long Island Region Scholarship. During the summer of 2015, Sinclair took part in Hofstra’s summer pilot Co-op program, working for the firm, Jaros Baum & Bolles, where he had an opportunity to work for their clients, including Hudson Yards, Memorial Sloan Kettering Cancer Center, MoMA, and the Horace Mann School.

Eric Katzen, a senior from Morganville, NJ, was awarded the Dagher Engineering, PLLC Scholarship. As a kid, Katzen had his interest in technology sparked when he received his Boy Scout merit badge in robotics. He furthered his interest through roles at Engineering for Kids, Ripak Aerospace, Lockheed Martin, and NASA. He is the President and Founding Member of the AIAA/ASME student chapter. He recently participated in the Co-op program at Hofstra working at Lockheed Martin and is currently doing an internship at NASA.