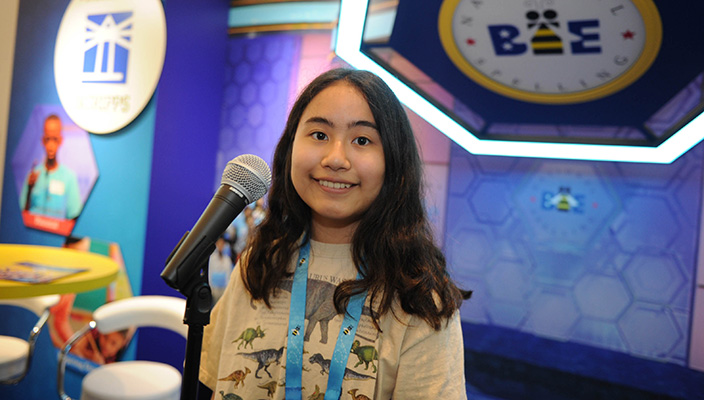 Syosset eighth-grader Rika Mizoguchi, champion of the fifth annual Hofstra Long Island Regional Spelling Bee, on Wednesday made it through the preliminary rounds of the Scripps National Spelling Bee, but fell just short of advancing to the finals.

Rika correctly spelled both words she was given – hierurgical in Round 2 Wednesday morning, followed by anthropocentric in Round 3 Wednesday afternoon.  Rika, 13,  is a student at Harry B. Thompson Middle School and an aspiring paleontologist. A total of 284 spellers competed, and only those who made it through both preliminary rounds had a chance at Thursday’s finals. Just 50 students made it to the finals, which is based on spellers performance during the two preliminary rounds of live spelling, and the results of a written exam taken earlier this week.

“I’m a little disappointed,  but mostly happy because just getting here is a pretty big struggle,” Rika said. Her father said he and his wife were awed by Rika and the other students competing. “I was proud and just amazed she was capable of doing this,” he said.

Hofstra has hosted and sponsored the Long Island regional bee for the past five years. “We’re so proud of Rika,” said Melissa Connolly, Hofstra’s vice president of University Relations. “This is always a great event and these students are all so impressive. For Rika to have made it as far as she did is an incredible accomplishment.”

The spellers range from 6-15 years old. No Long Island competitor has ever won the national Bee, according to the Scripps Spelling Bee website. In 2007, Westbury student Prateek Kohli tied for third place. Three students from New York state, including two from New York City (1997 and 2013), have won the national spelling title since the Bee began in 1925. The finals will be broadcast live on ESPN2 beginning at 10 a.m. Thursday.