The Department of Mathematics recognized student achievement at its annual awards dinner and the induction of new members into Pi Mu Epsilon, the honor society for mathematics. The end-of-year gathering on May 5, 2016, took place at the Multipurpose Room in the Mack Student Center. 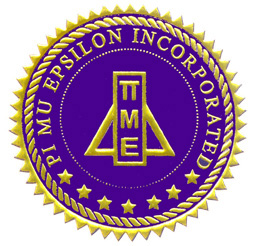 Azelle Waltcher Scholarship – the department’s biggest scholarship is awarded to an outstanding mathematics major who has completed no fewer than five advanced courses in mathematics.

Homer and Mairy Demetriou Scholarship – the department’s second biggest scholarship is awarded to outstanding mathematics majors who have completed their sophomore year and taken at least one advanced course toward their major. Recipients should have expressed intention to pursue a career related to mathematics.

Sylvia Pines Memorial Scholarship – awarded to an upper-class student who has taken the first course towards a mathematics major or minor who intends to pursue a professional career in mathematics or science.

Faculty Award for Excellence in Mathematics Education – recipients are selected on the basis of scholastic achievement and their intention to enter teaching at the elementary or secondary level.

Freshman/Sophomore Awards – book awards given to outstanding mathematics students in their freshman or sophomore year. All of the following students have a 4.0 in their mathematics major.