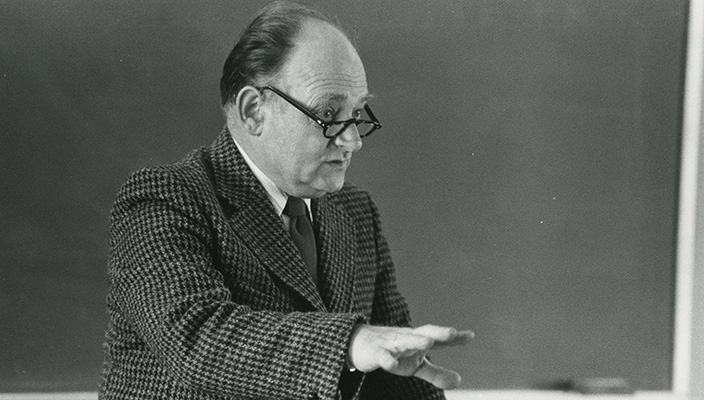 Hofstra University is deeply saddened by the passing of Dr. Herbert D. Rosenbaum, professor emeritus of political science, who died at home Wednesday afternoon. He was 95.

Dr. Rosenbaum was a professor for 39 years, serving twice as chairman of the political science department, as well as director for two of Hofstra’s nationally renowned presidential conferences. He was deeply interested and involved in local and state politics, most notably participating in the rewriting of the New York State Constitution.

He was a rigorous professor and trusted mentor who forged lifelong relationships with his students, including many alumni who went on to public service careers locally and nationally, such as Phil Schiliro, a former senior advisor to President Obama, and New York state Comptroller Thomas DiNapoli.

In his book, A Train: Memoirs of a Tuskegee Airman, the late Lt. Col. Charles W. Dryden, Hofstra Class of 1955, wrote of Dr. Rosenbaum: “Herb was a superb teacher, a brilliant scholar who knew how to get his students to focus on the essential essence of a course of study.”

“Dr. Rosenbaum was a superb member of our faculty—a caring and challenging teacher who was committed to excellence in all his endeavors,” said President Stuart Rabinowitz. “His contributions to the political science department, to the Hofstra community and to generations of students and alumni are an extraordinary legacy.”

It was at Dr. Rosenbaum’s behest that the Political Science department launched an annual student trip to Washington, D.C.  During the trip, students meet with Hofstra alumni who live and work in the area to learn more about the inner workings of government, and how to pursue careers in public service.  He continued to make that annual trip well into his 80s, regaling students with stories during the long bus ride to Washington, said Dr. Rosanna Perotti, chair of the Political Science department.

“He absolutely loved those trips,” Perotti said. “We walked everywhere on Capitol Hill, we spent six hours on a bus and he did it all.  He really stayed on top of his relationships with alumni, and those alumni would meet with our students every year because of Herb.”

Though Dr. Rosenbaum retired from teaching at the end of the 1990-91 academic year, he remained an energetic member of the Hofstra community. He participated in department events and programs, and was a committed member of HARP – the Hofstra Association of Retired Professors.

As a young man, Dr. Rosenbaum fled Nazi Germany with his family, arriving in the US in 1937. He graduated from New York University and completed graduate studies at Columbia University, earning his master’s and doctoral degrees there . He joined the Hofstra faculty in 1952. As a long-time chair and senior member of the Political Science Department, Dr. Rosenbaum was instrumental in recruiting new faculty and in setting and maintaining professional standards for their conduct. He served as director for the Hofstra Cultural Center’s presidential conference series FDR: The Man, The Myth, The Era (1982) and Jimmy Carter: Keeping the Faith (1990).

Dr. Bernard J. Firestone, dean of Hofstra College of Liberal Arts and Sciences and a former professor of political science, said, “Herb Rosenbaum was among the pre-eminent faculty of his generation. Over a career that spanned five decades, he taught thousands of students, engineered the creation of the University Senate, inaugurated Hofstra’s series of presidential conferences, and served as a mentor and role model for those faculty who followed him.”

His publication record includes a primer on government, “First Book in Government and Politics”, and the edited volumes of  proceedings from the Roosevelt and Carter presidential conferences.

Dr. Rosenbaum was named Teacher of the Year for the 1960-1961 academic year. In 2010 he was named to Hofstra University’s 75th Anniversary William and Kate Honor Roll, which recognized efforts and contributions of employees, alumni and friends who had a significant impact on the history of Hofstra University.

In 1997 Dr. Rosenbaum, accompanied by members of his family, made an emotional pilgrimage to his hometown of Grossen-Linden in the State of Hesse, where he unveiled a memorial stone, honoring those who were unable to escape the town and perished in the Holocaust.

In memory of Dr. Rosenbaum, Hofstra University flags will be flown at half-staff. Memorial services will be held Friday, May 20, at 11 a.m. at Gutterman’s Memorial Chapel in Rockville Centre. A private burial service will follow. Shiva arrangements are still pending.

Read the Memorial in the Long Island Herald