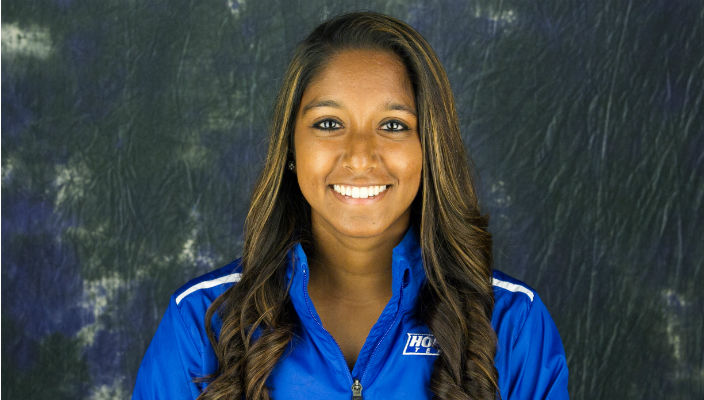 Bianca Derrick, a first-year Master of Public Health student and a 2015 health science graduate in the School of Health Professions and Human Services, was named Hofstra’s Outstanding Undergraduate Major of the Year by Eta Sigma Gamma, the national health education honorary society.

The award recognizes Derrick’s achievements as an undergraduate health science student with minors in psychology and nutritional science.  In addition to her strong academic performance, she interned at a pediatric medical clinic and did volunteer work. Derrick also played for Hofstra’s Division 1 tennis team and was named to the Intercollegiate Tennis Association’s All-Academic Team in 2014 .

“Receiving this award was one of my proudest moments at Hofstra,” she said. “Being inducted into the honor society was something I had been working toward for four years, but I was not expecting to win this award so that makes it very special.”

After completing her graduate degree in public health next year, Derrick hopes to go to medical school and specialize in emergency medicine, oncology, or internal medicine.

“I am interested in preventative medicine and public health awareness through epidemiology. Having my MPH degree opens so many doors for me to work for different companies and organizations that work directly with underserved populations,” she noted.  “I would ultimately like to be a doctor of osteopathic medicine and work directly through this holistic approach to treat patients.”

“The field of medicine lets me help people and develop a deep connection with them while also allowing me to think critically and analyze different patient situations that take into account the body, mind, and soul,” she added.  “Science and medicine have been two areas I have always been interested in and through my most recent internships and clinical rotations at the Northwell Health Group in Garden City, it has confirmed that this is what I want to do.”

Eta Sigma Gamma selects one outstanding senior from every university that offers health education programs of study.  The award is co-sponsored by the National Commission for Health Education Credentialing, Inc.