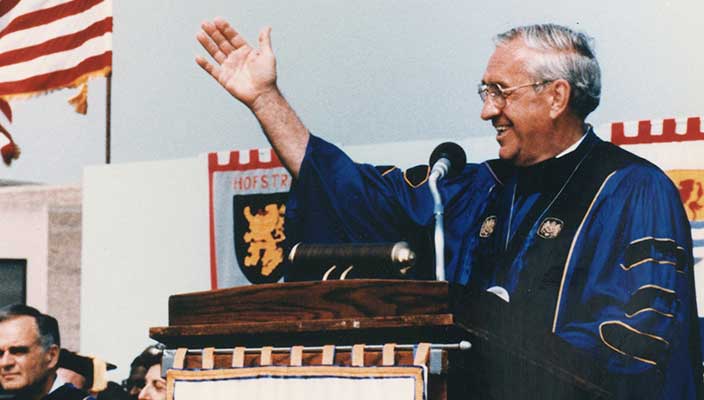 This morning, the University learned of the passing of Dr. James M. Shuart, our seventh president from 1976-2001. Dr. Shuart’s leadership was the impetus for transforming Hofstra in a multitude of ways – its academic offerings, physical campus, cultural imprint, and scholarship. These changes have allowed Hofstra to evolve from a regional university into one that has worldwide name recognition and attracts students from around the world.

There are few people who shared a more profound bond with Hofstra University than President James Shuart. He loved Hofstra deeply – as a student and student athlete, an alumnus, an admissions officer, a faculty member, a dean, a vice president and, finally, as president for 25 years.  Under his leadership, Hofstra grew and expanded in many ways: enrollment increased, academic offerings and library holdings more than doubled, athletics grew to Division I status, our internationally respected presidential conferences began, new facilities, buildings and wings were constructed that more than doubled the university’s physical space, the School of Communication was founded and Hofstra became the first private university campus in the nation to be fully accessible to the physically challenged. And, of course, his legacy can be seen in the tens of thousands of trees and tulips planted during his tenure – an effort that has turned our campus into a leafy oasis and led to it becoming a nationally recognized arboretum.

James Shuart was also a friend and mentor. It has been an honor and a privilege to succeed someone whose stewardship helped make Hofstra a world-class university. His grace and generosity of spirit serves as an example of the true meaning of Hofstra Pride.

Dr. Shuart received a bachelor of arts in 1953 and a master of arts in 1962, both from Hofstra University. He earned a doctor of philosophy from New York University in 1966. In 1959 Dr. Shuart joined Hofstra as an admissions officer and rose steadily through the academic and administrative ranks.

In 1971 Dr. Shuart was appointed Nassau County commissioner of social services, a post he held for three years, until his appointment as deputy Nassau County executive. He played the lead role in Nassau’s Commission on Priorities and conducted extensive demographic studies that enable him to make long-term predictions about population trends affecting higher education and other industries. From 1973-75, Dr. Shuart served as a member of the Hofstra University Board of Trustees and returned to Hofstra full time in 1975 as Vice President for Administrative Services. He was appointed President of Hofstra in 1976.

Dr. Shuart received many awards, including the Hofstra University Award for Alumni Achievement, and he was named Hofstra’s Alumnus of the Year in 1973. He was also awarded the Long Island Association Medal of Honor in 1988 for bringing “national and international attention to Long Island” and helping “to better address the needs of the region’s changing demographics.” In May 1991 President Emeritus Shuart was knighted as an Officer in de Orde van Oranje-Nassau in the name of Queen Beatrix of the Netherlands for his efforts in promoting Dutch-American relations. In 1999 he was selected as “Educator of the Year” by public television station WLIW.

Dr. Shuart married his college sweetheart, Marjorie Strunk Shuart, in the spring of his senior year at Hofstra. Their family includes sons James and William and their wives, and five grandchildren.

In memory of Dr. Shuart, all University flags will be flown at half-staff, and a moment of silence will be observed at each of this weekend’s commencements.  As soon as arrangements have been made, we will pass this information along to the University community. 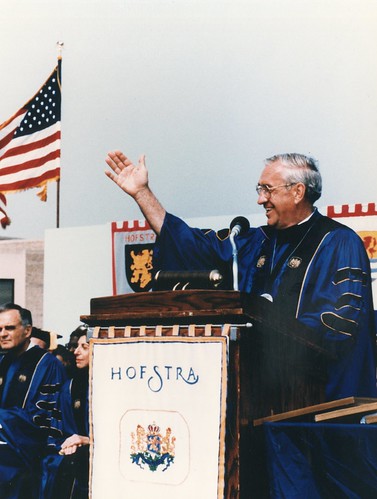 Photos of James Shuart through the years