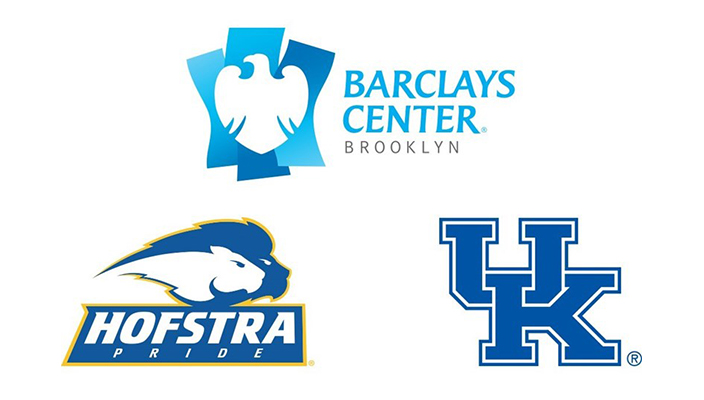 The Hofstra Men’s Basketball team will take part in one of the more exciting regular season contests in program history when it faces perennial national power Kentucky on December 11 at the Barclays Center.

The game is part of the BROOKLYN HOOPS™ Winter Festival and will be one of two games played that day at the home of the Brooklyn Nets (NBA) and New York Islanders (NHL). The other contest will pit LIU Brooklyn against St. John’s.

Hey Pride fans, now is the time to place a deposit on season tickets for the 2016-17 Hofstra Men’s Basketball season. Reserve your season tickets now and have the chance to see Hofstra take on Kentucky at the Barclays Center and sit with fellow Pride fans. For more information please contact the Hofstra Athletics Ticket Office at athletictickets@hofstra.edu or (516) HOF-TIXX.

“We are honored to be part of a great day of basketball at the beautiful Barclays Center,” said Hofstra Head Men’s Basketball Coach Joe Mihalich. “Our student-athletes and staff are grateful to our administration and Barclays Center’s staff for providing us with the opportunity to compete against a legendary program like Kentucky during the BROOKLYN HOOPS Winter Festival.”

Barclays Center opened on September 28, 2012, and is a major sports and entertainment venue in the heart of Brooklyn, New York. One of the most intimate seating configurations ever designed into a modern multi-purpose arena, Barclays Center offers 17,732 seats for basketball, 15,795 for hockey, and up to 19,000 seats for concerts, and has 101 luxury suites, four bars/lounges, four clubs, and 40/40 CLUB & Restaurant by American Express.

This appearance will mark Hofstra’s third at the Barclays Center. The Pride is 1-1 with a win over LIU Brooklyn during the 2014-15 season and loss against Tulane in 2012-13.