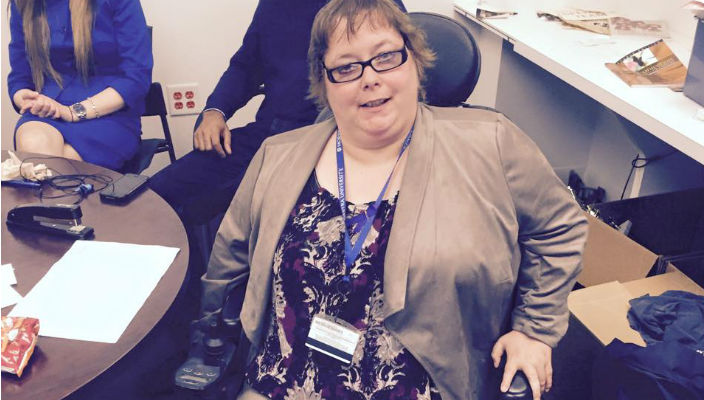 “I’ve been trying for a couple of years to get on this committee because I think it’s important to be an advocate for people with disabilities,” said Barbara, of Wantagh, New York, who has cerebral palsy.

The Transit Accessibility Advisory Committee meets once a month to give feedback to the Nassau Inter-County Express (NICE) staff about the development of services and the operation of buses that serve the disabled community throughout the county.  The group also helps NICE make sure its transportation systems are accessible and compliant with the Americans with Disabilities Act (ADA) and other regulations.

“I have been in a wheelchair all my life, but I don’t let that stop me,” said Barbara. “I know how to use my voice to be heard.”

She is a member of Hofstra’s award-winning Speech and Debate team and was also an intern at the Long Island Center for Independent Living, a nonprofit advocacy center for people with disabilities.  She hopes to use the oratory and communication skills she learns in her rhetoric classes to build a career helping others.

In 2013, Barbara spoke out against a builder owner in Amityville who had not repaired an elevator, which prevented Barbara and others with disabilities from accessing a second-floor medical office in the months after Superstorm Sandy. The owner was fined and ordered to complete the work in 60 days by a village judge.  The following year, Barbara brought attention to a local mall whose locked automatic doors were a violation of ADA policy.