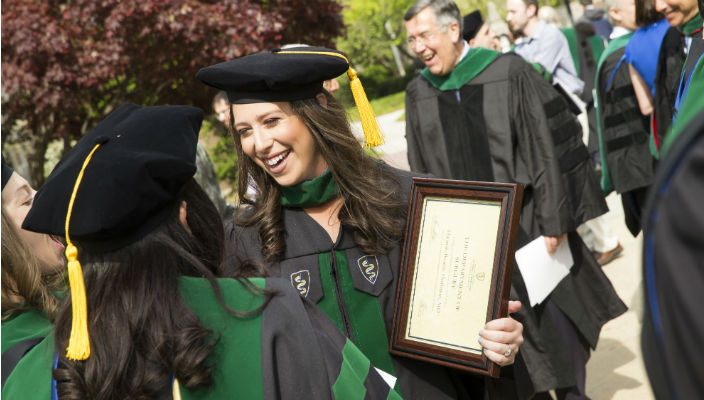 The second class of the Hofstra Northwell School of Medicine joined the ranks of doctors and scientists this week during a commencement ceremony at the John Cranford Adams Playhouse.  Degree recipients included 55 MDs and one PhD.

“Medical school is hard, there were times I thought about retreating,” said graduate Benny Chen, MD. “But I’m here today because of this community—they made studying fun, they made the wards an easier place, and they made facing and learning about death a little bit more tolerant.”

Hofstra Northwell’s second graduating class is a diverse group of men and women, including military vets who decided to put their years of training and service toward a career in medicine; students who spent their final months of medical study in Uganda; a 45-year-old former sales rep and single father who finally realized a lifelong dream; and a young rising star in biomedical research who has led The Feinstein Institute investigations in 3D printing technology and tissue engineering—a breakthrough that will revolutionize healthcare delivery.

During the ceremony, 16 graduates received awards of special merit, including graduation with distinction in research; academic department honors; the faculty council award for leadership and service; the Dean’s recognition; and the Branson Sparks Humanism Award, named in memoriam after a student in Hofstra Northwell’s inaugural Class of 2015.

“A positive attitude will carry you far, I know you will accomplish great things,” said Dr. Battinelli in closing.  “Remember, it’s not about who you know, but who knows you.”

In July, Hofstra Northwell graduates will begin the next phase of their training within top institutions such as Yale New Haven and Hospital of the University of Pennsylvania. More than half will remain in the eastern region for residency, including many at Northwell Health, while others journey to institutions throughout the country.