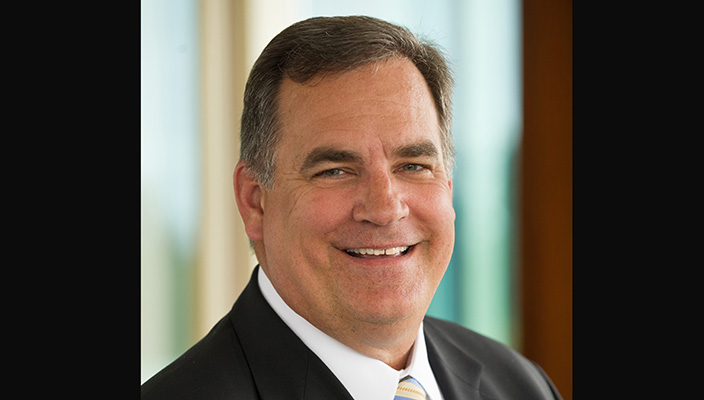 How does a boy from New Jersey with a love of airplanes and technology grow up to become a senior officer for the world’s biggest manufacturer of commercial airplanes? Ask Mike Delaney ’85, vice president and general manager of Airplane Development for Boeing Commercial Airplanes. He’ll tell you it’s about steering his career purposefully in certain directions, while also having been at the right place at the right time. Listening to him reflect on professional achievements, it’s easy to tell the admiration he has for the industry he now helps lead.

In his role as a vice president at Boeing, Delaney is responsible for all commercial airplane development programs. He leads the design, development, integration, testing and certification of the next generation of airplane models.

Delaney chose to attend Hofstra in part because of the small classes and attentive faculty. “After I graduated, I went to work at Grumman Aerospace on Long Island,” he said. “I spent a couple of years working in aerodynamics and flight testing. Then I left in ’88 and moved to Southern California for a job with McDonnell Douglas and switched from working on military airplanes to commercial.”

That switch to commercial aerospace work was fortuitous. In the late 1980s-early 1990s many engineering companies laid off thousands of workers as the Cold War came to an end and military contracts were lost.  “I never worried I made the wrong decision,” said Delaney.

In 1997 McDonnell Douglas, Boeing and Rockwell merged into a single company, and Delaney’s responsibilities grew. A number of promotions followed, including that of director of the 717 Airplane Test and Validation and then 717 deputy chief project engineer. He was sent to Toulouse, France, for his executive MBA and later was promoted to vice president of engineering for commercial airplanes. He was also named an Associate Fellow of the American Institute of Aeronautics and Astronautics (AIAA) in November 2011 and named a Fellow of the AIAA in November 2013. His current position to vice president and general manager was announced in March 2016.

When asked what he finds most rewarding about his industry, Delaney answer is quick and sincere. “Commercial airplanes connect the people of the world and make it a smaller place. We are able to transport tens of millions of people safely. It’s the safest form of transportation and the most efficient.

“There are many days I leave my office in Seattle, get on a plane, go to sleep and wake up in Singapore as comfortable as can be. And I have no worries about my safety or any risks. It’s an amazing product.

“It’s pretty spectacular to be a part of Boeing for 28 years, a significant part of the company’s history. We’re celebrating 100 years this year. We started as small wooden spruce and canvas airplanes, and 60 years later we were landing on the moon. We’re flying everywhere, point to point on the globe.”

When Delaney is asked how he and his colleagues keep not only current, but ahead of constantly changing technology, he answers, “Because of Boeing’s heritage, age and success, we’ve been able to put together a system that works really well. We’re always recruiting new talent, and that brings in the newer technology and ideas and the things that kids are going through school are learning.

“But our products have such a long lifecycle – there’s a lot of history. For example, we’re building a new version of the 737 today, and the first version flew in 1967. So there is a need to stay current, but the more interesting part of Boeing is the long term culture and product performance, safety and the ability to always put forward the products that serve our customers best. We’re not interested in technology for technology’s sake.”

Delaney has returned to Hofstra’s School of Engineering and Applied Science (SEAS) several times in recent years to talk to students about careers in the aircraft industry, and now he serves on the Dean’s Advisory Board. Dean Sina Rabbany is appreciative of his contributions. “Mike brings a global managerial perspective to our planning for the future of SEAS,” says Dr. Rabbany. “He serves on the boards of several high-profile engineering schools, but his ties to Hofstra are quite strong, and he is eager to see us continue to develop into a top-tier school emphasizing undergraduate engineering education.”

When asked about advice he shares with current engineering students – young men and women much like his younger self who are enamored with aircraft and engineering, Delaney offers, “Aspire to be great and know what you want to do. Be passionate, be curious. Solve problems and create value. We’re interested in products and partners that allow our customers to be successful.

“Those are the kinds of people we’re looking for here at Boeing.”