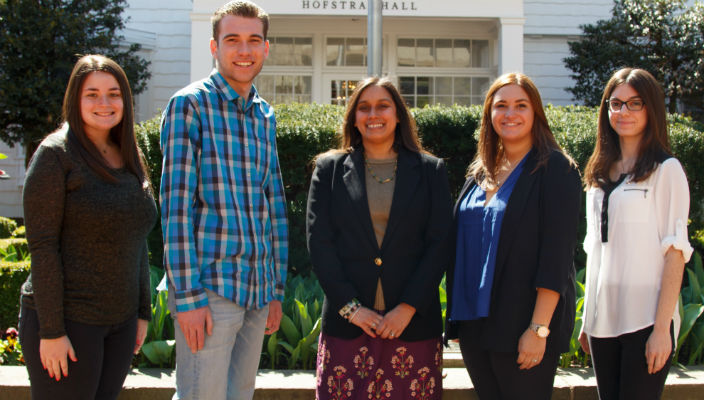 Four students with outstanding academic records and an interest in political science will study and intern at the presidential nominating conventions this summer as part of a seminar sponsored by The Washington Center.

This is the third presidential election cycle that Hofstra has participated in the prestigious seminar, which combines formal instruction with guest lectures, panels, tours and fieldwork with a variety of convention-related organizations to give students a behind-the-scenes look and understanding of the nominating process.

“These outstanding students will have a unique opportunity to be a part of history in the making for the 2016 presidential race, and they are well prepared for and excited to see the presidential nominating process in action,” Bose said.

The two students attending the Democratic National Convention seminar are:

Rita Cinquemani is a rising sophomore from Whitestone, New York who is pursuing a dual degree in accounting and political science.  She first got involved in politics when she obtained an internship with the New York City Council’s 19th district office during her junior year of high school.  By participating in the seminar, Rita hopes to learn more about the political process on a national stage and incorporate it with her knowledge of local politics to better the local community. Upon graduating from Hofstra University she plans on going to law school and eventually running for public office. Currently, she is the Student Services chairperson of the Student Government Association. Rita is also a member of Together We Rise at Hofstra, Alpha Phi Omega (PG), the Speech and Debate Team, Colleges Against Cancer, and Pi Kappa Delta Forensics Honor Society.

Steven Eareckson is a rising senior from Long Island who is pursuing a double major in political science and history, with a minor in legal studies in business.  After graduating from Hofstra, he plans on attending law school in the Washington, D.C. area, where he may also pursue a joint degree.  While at Hofstra, Steven has interned for a local law office and New York State Assemblyman Chad Lupinacci.  He also has worked as a research assistant and peer teacher.  As one of Hofstra’s first presidential studies minors, Steven has a special academic interest in the American presidency.  He has represented Hofstra at The Washington Center’s January 2015 “Inside Washington: Exploring Bipartisan Solutions” academic seminar, and he is Hofstra’s Student Fellow at the Center for the Study of the Presidency and Congress in 2015-16.

The two students attending the Republican National Convention seminar are:

Ashley Guido, a rising senior, is majoring in political science and history. She is an officer for Hofstra’s chapter of Phi Alpha Delta Pre Law Fraternity, a writer for the Odyssey Online, and a representative for Love Your Melon, an apparel brand that raises money for pediatric cancer. After graduation, Ashley plans to attend law school and pursue a career in government.

Rebecca Marks, a rising sophomore, is majoring in political science and a student in Hofstra’s Legal Education Accelerated (LEAP) Program.  She is also a Resident Safety Representative at Hofstra.  Becky is the treasurer of the Hofstra College Republicans Club and enjoys all aspects of politics.