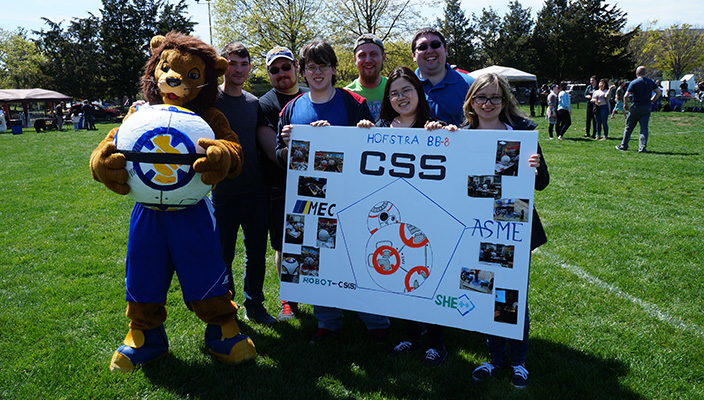 Hofstra Music Fest may have featured music by Outasight and Shwayze, but some rock and especially roll was made possible by the debut of the little round robot BB-8 from Star Wars: The Force Awakens, recreated by members of Hofstra’s Computer Science Society, founded by senior Jacqueline Hsu.

The students, who have been designing the robot since February 2016, and began  building it mid-April, chose the April 30th Music Fest to try out their creation. “It’s a very rough prototype,” says Hsu. “We’ll continue working on it, and hopefully it’ll have a head soon!”

Hsu emphasizes that the progress made on the BB-8 is due to an amazing group effort from students throughout the School of Engineering and Applied Science and other areas of the University. She is thankful for funding that the Student Government Association (SGA) provided and assistance from two branches within the Computer Science Society: Women in Computer Science (She++) and RobotiCS(S) that “helped with the software design.”

“This has been a very exciting process,” says Hsu. “It’s the largest project to be done by the SEAS student clubs, and it’s a true testament of how wonderful things can happen when you put programmers and engineers in a room together.”