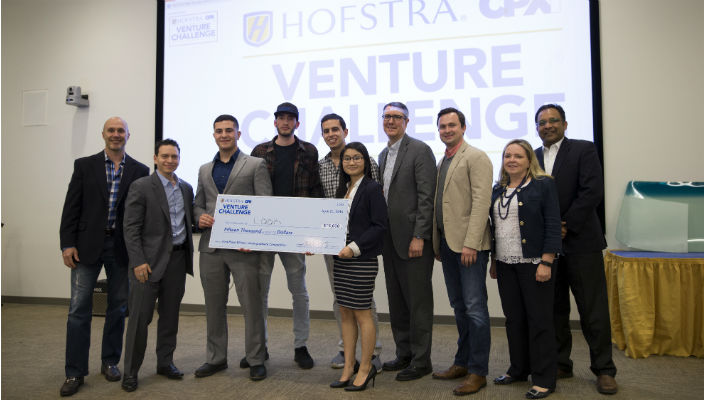 The competition, sponsored by alumnus and trustee Mike Seiman, CEO of the digital media company CPXi, drew more than 57 competitors – the largest number since it began in 2013. A total of 17 finalists (11 undergraduate students and six graduate students) competed for $42,000 in seed money for their ventures.  Seiman founded CPXi when he was still a student at Hofstra.

Second place and $10,000 went to Beacon, a location-based app for those between the ages of 18 and 29 to meet those of similar interests was presented by juniors Christopher Davie and Taylor Ninesling. Dylan Ander, a senior won the 5,000 third place prize for GearLocker – a guitar lock with a GPS chip.

“We come from such diverse backgrounds and we never thought we would get to this place,” Lynn Luong said. “Now we have the motivation and the fire to keep going.”

The students also credited Hofstra’s Center for Entrepreneurship, which presented the 2016 Venture Challenge, with providing the guidance that helped them make a successful pitch. The center, through its Entrepreneurs-in-Residence and Accelerator programs, provided CPXi contestants with sessions on a wide range of issues including preparing a business pitch and plan, intellectual property issues, and how to build a business without outside capital.

“The entrepreneurs-in-residence helped us so much,” Anthony Avgi said. “They gave us pointers on our presentation and our business plan. They spent so much time with us. We learned so much.”

On the graduate side, Hofstra Northwell School of Medicine student Todd Goldstein took first place and $7,000 for Mano-Matic, a 3D printed prosthetic hand controlled with electronic motors and sensors.  The runners-up were were: Urban Jungle Green Roofing, an innovative engineering and installation company founded by Nicholas Wejchert, which won second place and $4,000; and TobChat, a “connectivity media” alternative to social media for developing nations presented by Oluwatobi Kareem, which won third place and $1,000.