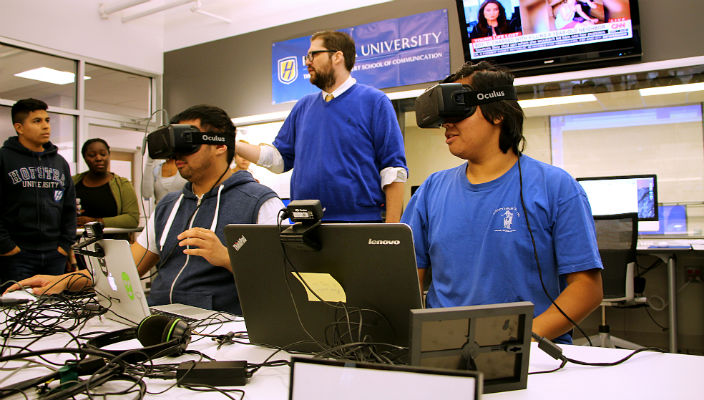 The Lawrence Herbert School of Communication presents its second symposium this academic year examining the use and evolution of virtual reality in journalism and nonfiction storytelling with some of today’s top developers, editors and filmmakers.

“In Fall 2015 we had invited interactive documentary creators to talk about the web as a seamless environment for text, film, and audio,” said Aashish Kumar, associate professor in the Department of Radio, Television, Film. “This is part two of our Immersive Media series, with a focus on virtual reality technology and how it is being used in fields as diverse as journalism and documentary, in addition to gaming.”  Professor Kumar is co-chair of the symposium, along with Russell Chun, assistant professor in the Department of Journalism, Media Studies and Public Relations.

During the day’s events, students and faculty can explore and interact with the latest virtual reality technology being used by organizations such as the Associated Press, PBS, The New York Times, YouTube, and Facebook.

The event is free and open to the public, and is co-sponsored by the Hofstra Cultural Center, Faculty Computing Services, the Departments of Radio, Television, Film and Journalism, Media Studies, and Public Relations, the Documentary Filmmakers Club, and Continuing Education.