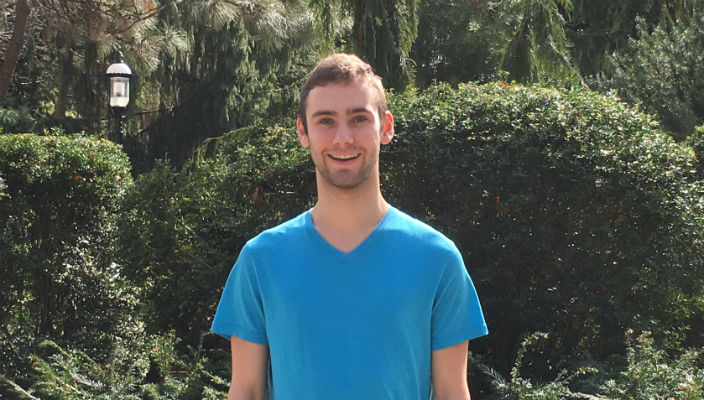 Andrew Lee Garrett, a junior in the Hofstra College of Liberal Arts and Sciences, has won a national scholarship to spend eight weeks this summer in Japan studying the country’s national language.

The Critical Language Scholarship is sponsored by the U.S. State Department, and provides fully-funded intensive training in one of 13 critically needed foreign languages, through both formal instruction and one-on-one meetings with native speakers for conversational practice and cultural activities.  Students vying for a scholarship to Japan must have at least two years of formal study of Japanese in college, and also show how they will use the language in their professional lives.

Garrett, of Issaquah, Washington, is majoring in mathematical business economics and Japanese and minoring in international affairs and political science, and hopes to use the experience to improve his fluency and learn more about Japanese culture.

“My interest in Japanese began in high school,” he said. “It was the most difficult language course being offered, and I wanted to see if I could do it.  Now that I’m in college, learning the language is an important part of my career goals to work in economic development in Asia. “

The trip, from May 30 to July 31, marks Garrett’s first trip overseas. While in Japan, he hopes to see Kyoto, the country’s former capital, and also climb Mount Fuji, an active volcano and the country’s tallest peak.  He also plans to visit friends he made in high school when his family hosted students from Japan, as well as classmates from campus, where he is treasurer of the Nippon Cultural Society student organization and a global mentor for international students.

Garrett, an Honors College student, was guided through the application process by Patricia Welch, professor of Japanese and comparative literature and chair of the Department of Comparative Literature and Languages, and Neil H. Donahue, assistant provost for undergraduate research and fellowships and senior associate dean of Honors College.