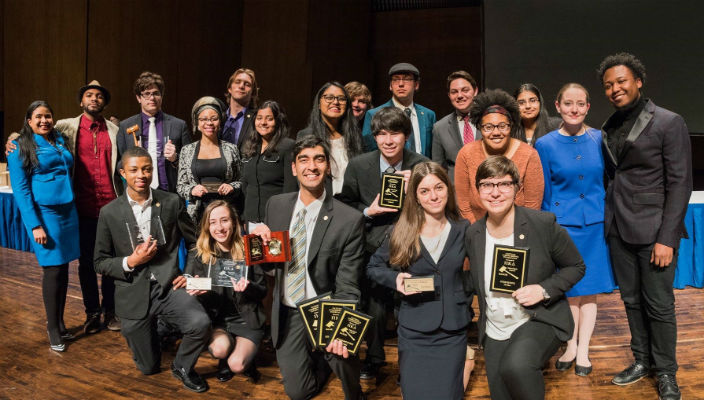 Hofstra’s Speech and Debate Team won 14 awards at the Pi Kappa Delta national tournament, with two team members placing first and second in the nation in their categories.

The Hofstra team competed against 86 other colleges and universities across the nation in the tournament, which was held this month in Lexington, Kentucky.

“When I accepted the challenge of rebuilding the Hofstra University forensics program two years ago, I couldn’t have imagined how far this young team could and would go,” said Forensics Director Tomeka Robinson, PhD, an associate professor in the Department of Rhetoric in the Hofstra College of Liberal Arts and Sciences. “The Pi Kappa Delta National Tournament is the biggest and only truly comprehensive national tournament in the country, and I am so proud of Hofstra’s outstanding performance.”

Other honors from the Pi Kappa Delta tournament included:

Dr. Robinson and graduate assistants Sean Allen, Jaysin Spradley, and Amanda Donato have coached the team to 92 other awards in its second year of competition, and more than 155 in total since its inception in 2014.

The team will compete in its final competition of the academic year, the National Forensic Association’s national tournament, at Ball State University in Muncie, Indiana on April 14-18, 2016.