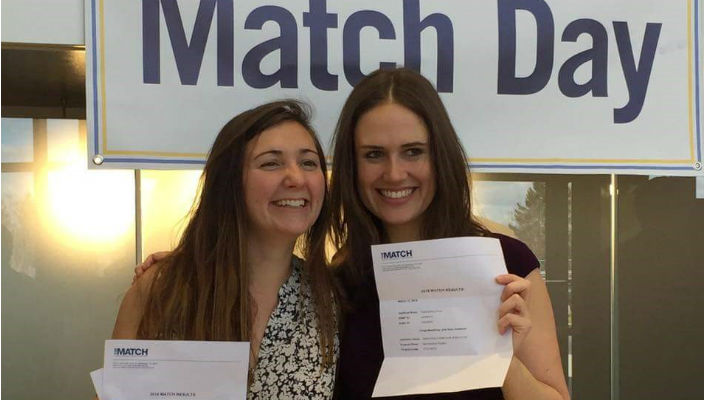 The second graduating class of the Hofstra Northwell School of Medicine found out where they’ll spend the next three to seven years of medical training at Match Day, Friday, March 18, a national event in which results for residency placement are revealed to aspiring physicians in medical schools across the country.

“It’s another competitive field this year with six percent of residency applicants nationally who did not match to a residency program,” said Lawrence G. Smith, MD, MACP, dean of the School of Medicine in a speech prior to the official letter opening. “That’s not the case for 100% of students here today—all made their match.”

Official results for Hofstra Northwell revealed residency placements within nearly 20 specialty areas and with top institutions such as Yale New Haven and Hospital of the University of Pennsylvania. Of the class match, more than half will remain in the eastern region for residency, while others journey to institutions throughout the country.

Match Day occurs on the third Friday of March each year at allopathic medical schools in the United States where the results of the National Resident Matching Program (NRMP) are announced. The Match process begins in the fall for applicants, usually in the final year of medical school, when they apply to residency programs at which they would like to train. Program directors review applications and conduct candidate interviews. Applicants later submit to the NRMP their rank order lists of preferred programs, and program directors rank applicants in order of preference for training.

It’s a process teeming with competition and uncertainty, and why some applicants decide not to enter the next phase of training alone.

In fact, four duos at the School of Medicine vied for residency spots via the NRMP’s “Couples Match,” where pairs of students, from those in committed relationships to close friends and rivals, can apply for residency together with the goal of landing in the same program and/or region for their training.

“We were confident that we would end up together, but today made it reality,” said Nicholas Petit, 36, a former Army captain and veteran who will join the emergency medicine residency program at Wake Forest in North Carolina while his fiancée, Lianne Cagnazzi, 28, is going to the University of North Carolina for internal medicine. “We’re very excited to be going in the same direction.”

“No matter what stage in your life, I say never give up your dreams,” said Squiers, who will join the residency program at Reading Hospital Medical Center in Pennsylvania. “They can come true with belief, hard work and dedication.”

Now on the road to residency, the Hofstra Northwell Class of 2016 takes another step toward the future with graduation on Monday, May 9 at the John Cranford Adams Playhouse, Hofstra University.