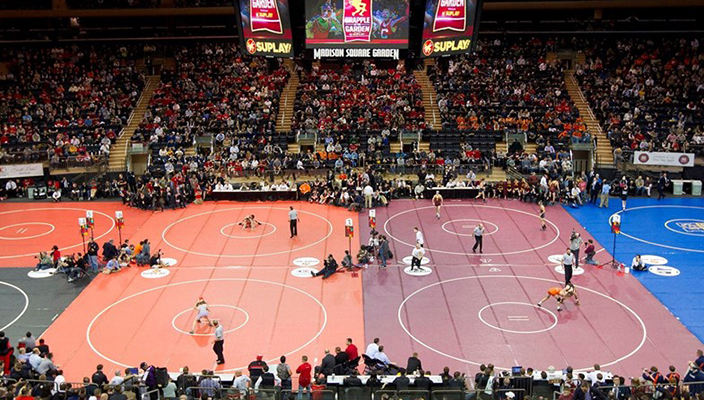 When Hofstra hosts the NCAA wrestling championships at Madison Square Garden, March 17-19, the University will have an opportunity to showcase the talent of more than its skilled student athletes. At the performance of the National Anthem each evening, the Hofstra ROTC Color Guard will be on the floor of Garden presenting the nation’s colors and flags, and Christina Cinnamo, a junior music education major from Franklin Square, NY, will perform the Star Spangled Banner on Friday, March 18.

Cinnamo currently performs with Hofstra’s Chorale, the Chamber Choir, and Vocal Jazz Quartet. She has also been involved with Hofstra Opera Theater, Sigma’Cappella, and the Hofstra Symphonic Band.

The ROTC cadets who will be representing Hofstra include:

Hofstra junior Michael Hughes and graduate student Jamel Hudson have advanced to the NCAA wrestling championship, marking the 20th consecutive tournament – since 1997 – that Hofstra has sent at least two wrestlers to compete for a national title. This is the first year that ESPN will televise every session and cover every mat for the entire three days of the event.