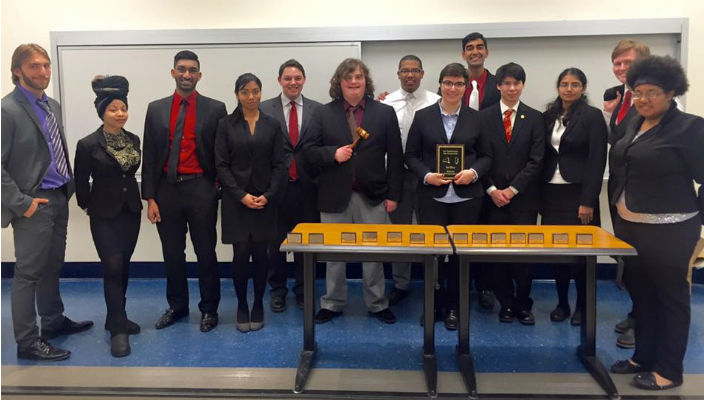 The Hofstra University Speech and Debate Team continues its winning ways, amassing 92 individual and team awards so far in its second year of competition.

Under the leadership of Dr. Tomeka Robinson, forensics director and associate professor in the Department of Rhetoric, 27 students have traveled and competed this year, and six are now qualified to compete in the highly competitive National Forensics Association’s national tournament on April 14-18, 2016 at Ball State University in Muncie, Indiana.

Later this week, from March 16-18, another 21 students will travel to Lexington, Kentucky to compete in the Pi Kappa Delta national tournament, where Dr. Robinson was selected president in 2015, making her the first person of color to lead a national collegiate speech and debate organization.

The team’s most recent competitions included the Northern Virginia Community College Tournament, the Long Island Forensics Extravaganza, and Southern and Northern Atlantic Forensic Union Tournament (SNAFU #9), as well as the Emerson College & Suffolk University tournaments in Boston, MA – where team members picked up a combined 26 awards at the events.

Hofstra’s Speech and Debate team was re-launched in Fall 2014 and won 50 individual and team honors in its first year of competition.