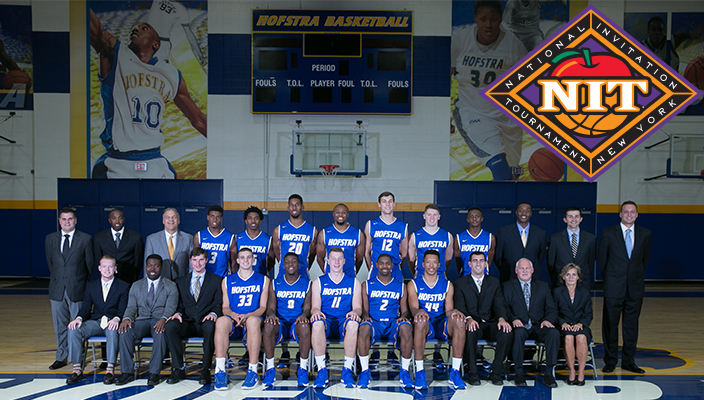 Tip-off from the Charles E. Smith Center is scheduled for slightly after 8 p.m.

There will be live video of the game (via ESPN3) with links available on this page or via the men’s basketball schedule page at GoHofstra.com. The Pride Productions audio only broadcast can be heard via the portal and the WRHU mobile app as well.

This will mark the program’s fifth appearance in the prestigious postseason NIT and the first since facing DePaul in 2007. It is Hofstra’s seventh overall game in the NIT.

Hofstra enters the NIT with a 24-9 record after advancing to the championship game of the Colonial Athletic Association Tournament. The Pride dropped a heart-breaking 80-73 overtime decision to UNCW in the championship game. Hofstra earned a bid to the NIT by virtue of its regular season CAA title.

George Washington is 23-10 this season and fell to Saint Joseph’s in the quarterfinals of the Atlantic 10 Tournament by the score of 86-80.

This will be the fourth all-time meeting between Hofstra and George Washington with the Colonials holding a 2-1 lead in the series. The teams met in both 2012-13 and 2013-14 with GW winning both games. Hofstra’s win in the series came during the 1982-83 campaign when the Pride earned an 82-67 victory in a game played at Florida Southern.

Hofstra To Host Virginia In WNIT Third Round Action On Tuesday
Hofstra Men’s Basketball: Road to the Championship