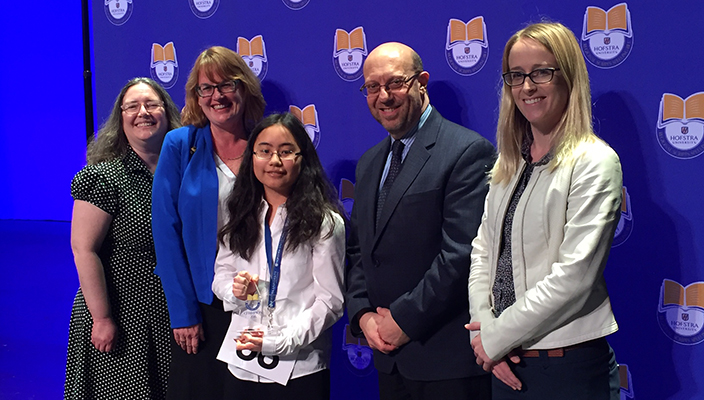 Rika Mizoguchi from HB Thompson Middle School in Syosset, NY, is the champion of the fifth Hofstra Long Island Regional Spelling Bee that was held today, March 13, at the John Cranford Adams Playhouse.

Rika’s winning word was “adnate.” The Bee went 17 rounds before Rika was announced as the winner. She will now represent Long Island at the Scripps National Spelling Bee in Washington, D.C., later this spring.

First runner up in the competition was Sheryl Lin from Island Trees Middle School in Levittown. Making it to the final four spellers in the competition were Ryan Himmelsbach of Setauket Elementary School and Anna Romero of Babylon Junior-Senior High School. More than 130 4th-8th grade students from schools across Nassau and Suffolk County participated in today’s Hofstra Long Island Regional Spelling Bee.

Hofstra extends special thanks to The Scripps Company, Merriam-Webster Inc., and Encyclopedia Britannica for their support of the competition.