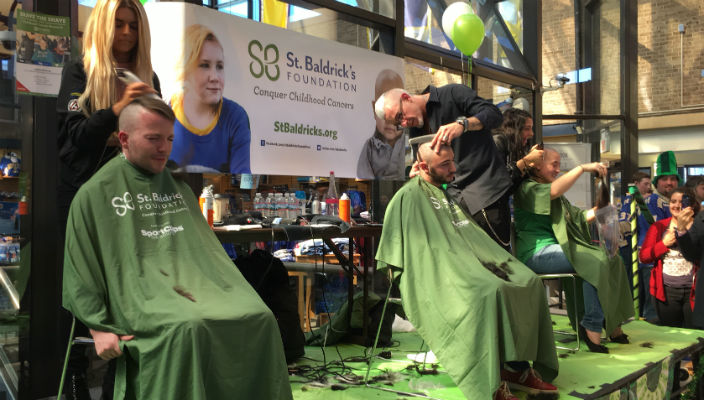 Hofstra University’s eighth annual St. Baldrick’s Day event raised more than $31,000 by midday, as more than 45 students, faculty, and staff went under the buzzer to shave their heads in support of childhood cancer research.  That amount is expected to rise by the end of the day, when online donations are fully counted.

“My only reservation about shaving was whether I’d look good afterward, but if you think about kids with cancer, they don’t get that choice,” said Gabriella Muñoz, a senior computer science major. “So if kids can go through it, I think I can handle it too.  It’s an important cause that deserves attention.”

She first donated in 2014, and says she spent the last two years growing her hair to its current length. Her locks will be donated to Children With Hair Loss, a nonprofit organization that makes wigs for children who have suffered hair loss as a result of various medical-related afflictions.

Last year Hofstra raised a record-setting $41,599 for St. Baldrick’s Day, and this year Dr. Herman Berliner, dean of the Frank G. Zarb School of Business and former provost, has again agreed to shave his head if the Hofstra community can raise $45,000.

For the second year in a row, the University also recognized the individual who raised the most money with the Pete Libman Pride Award, given in honor of the late dean of students who championed the event from its inception until his death from pancreatic cancer in 2014.    This year’s honoree is Kristen Reese, a first year medical student, who raised $2,100.

Teams that raised the most funds include the Hofstra Northwell School of Medicine (more than $23,300) and the Roller Hockey Team ($4,300), who organizes the St. Baldrick’s event at Hofstra every year.