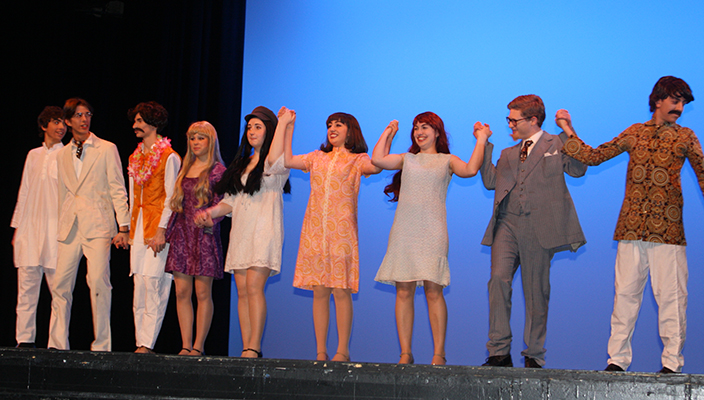 Students from six local schools took part in the annual high school competition that Hofstra University hosts as part of its annual Shakespeare Festival, which is now in its 67th year. Since 1951 the competition has allowed younger students to perform classic scenes on the Hofstra stage. Long Island native and Tony Award-winning actor Brian Dennehy has said the high school competition gave him his first taste of theatrical success at the age of 15.

This year’s high school competition took place February 25 and 26, 2016. Students spent all day on campus and participated in workshops on stage combat, voice and speech and improv. Each participating school also performed selected scenes from Shakespearean plays for a panel of faculty members from Hofstra’s Department of Drama and Dance. Staging, lighting, costumes, music and sound were part of the presentations. The Hofstra professors then offered the students critique and advice.

At the end of both days, Hofstra faculty presented awards for Best Actor, Best Actress and Best Ensemble.

The Tempest – Division Avenue High School in Levittown ~ Act IV, scene 1. Hofstra’s drama professors said they enjoyed the magic that Levittown portrayed and the clarity of their ideas.

Love’s Labour’s Lost – Calhoun High School in Merrick (top photo) ~ Act II, scene. Lori Zomback received the Best Actress award for her performance as the “Princess of France.” Calhoun brought a mod-60s vibe to their scene, which Hofstra drama professor Jennifer Hart praised as her favorite concept of the afternoon. The cast was complimented for their costumes and for their light and fun performance.

In addition to the performances on this day, students brought in set and costume designs for Romeo and Juliet or A Midsummer Night’s Dream. Models and sketches were critiqued by Hofstra faculty and design students. Best Set Design went to Ryan Dziedziech and Best Costume Design was awarded to Rebecca Lewis, both of Calhoun High School.

Hamlet – High School for Environmental Studies in Manhattan ~ Act IV, scene 5. Amancio Campos Pineda received Best Actor for his portrayal of “Laertes.” The cast was applauded for their physicality and unique choices they made in terms of bringing the text to the stage. Yamilex Taveras was singled out for her sympathetic performance of “Ophelia.”