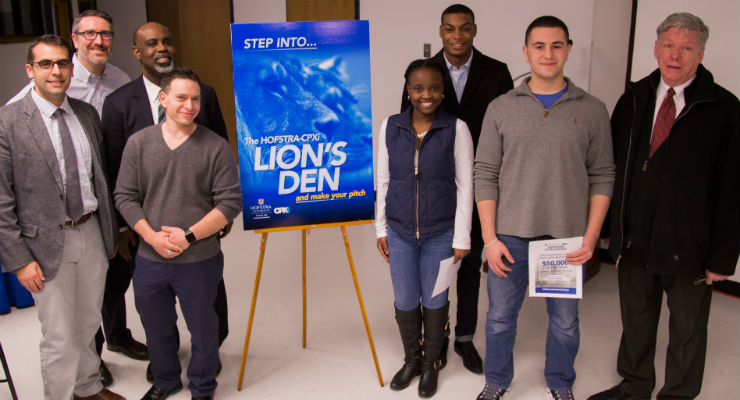 Student entrepreneurs pitching ideas for a car carbon monoxide detector, a vibrating smoke detector and an apparel company that donates some proceeds to protect endangered animals won seed money for their ventures in the first-ever Hofstra-CPXi Lion’s Den competition.

The Shark Tank-style pitch contest, run under the auspices of Hofstra’s new Center for Entrepreneurship, gives students two minutes to make a business pitch to a panel of judges, who award a total of $1,000 in prizes for the best proposals.

“Tonight is the first step in our journey to build the Center for Entrepreneurship,” Center Executive Director Mark Lesko said of the competition. Twelve students pitched ideas to an audience of more than 30 students and professional entrepreneurs.

Hofstra alumnus and Board of Trustee member Mike Seiman, CEO and founder of CPXi, was one of the judges. Seiman, who founded CPXi when he was still a computer science student at Hofstra, told the students that successful entrepreneurs never stop pitching.

“Never is your first idea your last idea,” Seiman said. “I’ve failed at many things, as well as had a lot of success. It’s about perseverance. Just never give up. Win or lose, don’t let this be the last time you get up in front of a group and pitch. Come back and pitch again.”

CPXi also sponsors the Hofstra-CPXi Venture Challenge, a more involved business competition in which students participate in entrepreneurship workshops on topics such as developing business models and formulating a pitch before competing for a total of $50,000 in prizes.

First place winner Tamisha Lubin, a senior management major, proposed a portable carbon monoxide detector for cars. “I didn’t have confidence before, but now that I pushed myself to get up and do this, I know I can do it again,” she said. Lubin won $500.

The other winners were: freshman Anthony Avgi (second place, $300), who is launching an apparel and accessory company that would donate a portion of its proceeds to protect sloths, and senior Keanu Hypolite (third place, $200) who is proposing a vibrating smoke detector to alert sleeping residents to house fires. The detector that would affix to bed frames and shake the bed, as well as emit a sound.

Sunday – Hofstra Welcomes Ladysmith Black Mambazo
“As You Like It” Rolls Out the Red Carpet, Feb. 18