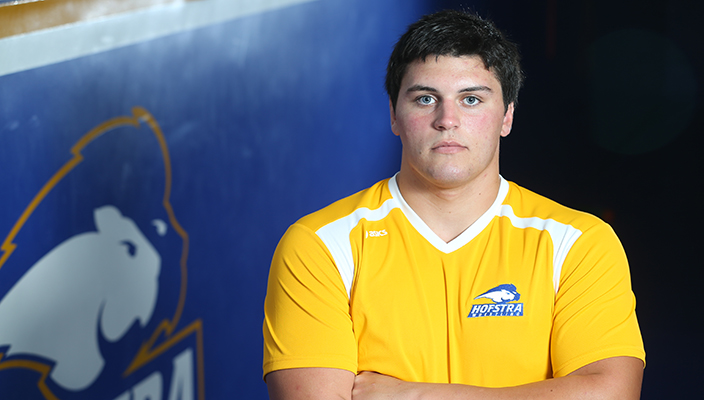 The statistics and national rankings suggest that Michael Hughes had an easy decision coming out Smithtown West High School. As Hofstra Wrestling’s starting heavyweight, Hughes, a junior, has already posted his first 30-win season this year and has lost just twice since the calendar turned to 2016.

But wrestling wasn’t always an assured part of Hughes’ collegiate future. As a lineman, Hughes earned All-Suffolk County and all-league selections as well as a spot on the Long Island team in the Empire State Challenge all-star game. He then was faced with a choice: pursue wrestling or football after graduating in 2013.

“That was the hardest decision I ever had to make because I love both sports, but the thing about wrestling is that you don’t have anyone else to rely on when you’re on the mat,” Hughes said. “There’s nobody to fall back on. It’s all on you. I love going one-on-one and seeing who is better.”

Being accountable for the entire outcome appealed to Hughes, and the decision has worked out as the 6’3” grappler improved from a 13-win season in his freshman campaign to 22-11 last season. Hughes once again improved on his win total, taking a 30-7 record into Hofstra’s matches against Rider and Drexel this week.

Four of those seven losses have come against opponents ranked in the top-20. Hofstra Head Coach Dennis Papadatos said the experience of going up against the best, including top-ranked Nick Gwiazdowski from North Carolina State, No. 3 Adam Coon from Michigan and No. 4 Blaize Cabell from Northern Iowa showed Hughes what it takes to get to the next level. Papadatos said the only thing Hughes needs to do is believe in himself more to eventually reach those lofty heights.

“When Mike is confident, he’s unbeatable,” Papadatos said. “He’s done a better job of believing in himself. It’s all about experience. He wants to attack his weaknesses and that’s where he’s grown the most. We still have to help him refine some aspects, but the sky is the limit for him in this sport. He has the ability, tools and mindset to be at the top of the podium.”

Hughes, ranked 18th by The Open Mat, has recorded 10 falls this year, including a pin 18 seconds in during the Edinboro Open where he posted three consecutive falls. Hughes used his imposing frame and technical skill to cap a nine-match winning streak with those three pins. Papadatos said the biggest obstacle Hughes has faced has not necessarily been a heavyweight opponent going against him, but keeping his confidence and weight up. Hughes got up to 310 pounds in the summer before the grueling workouts brought it down as low as 260. Papadatos said Hughes’ optimal weight is in the 280-range, which is where Hughes has stayed in recording his career-best campaign.

“His weight would be a lot less if he didn’t put in such a good effort to keep it on,” he said. “He does a great job with his nutrition.”

Monitoring his nutrition and workout patterns has helped the coaching staff get the most out of Hughes. Papadatos took over the head coach spot after Hughes’ freshman year, and immediately Hughes went from registering just two falls as a freshman to 10 as a sophomore in 2014-15. Physical practices, led by Papadatos and assistants Dan Vallimont and Jake Patacsil, have led to better results.

“Buying into a new system in my second year really helped me improve,” Hughes said. “Every coach has something they bring to the table, whether it’s my game on top or on neutral. Every day in practice we do hand fighting and lately that intensity has really translated well in matches.”

Hughes earned a reputation for tenacity while recovering from a torn ACL in his left knee suffered during his sophomore season in high school. He then had to recover from a torn meniscus before his senior season. But Hughes ended his high school career by going 42-0 with 31 pins for Smithtown West and was a finalist for the National High School Coaches Association Senior Award.

“Since I rehabbed the one area over and over, I came back stronger than what I was before,” Hughes said. “I haven’t had any issues since and I feel stronger than I ever have. It forced me to push myself because I didn’t want to stop wrestling.”

The biggest issue both his high school and college coaches have faced with Hughes is finding suitable practice partners. In high school, Hughes would go up against wrestlers with college experience and even an ex-Marine who was invited by his coach. Hofstra’s staff has gone to similar lengths to improve his practice time, having Hofstra members work in pairs against him. Sometimes sophomore Michael Oxley, who wrestles at 197, draws the unenviable task of going up against someone who has 80 pounds on him.

“The hardest thing is giving him the strength that he’ll oppose with other heavyweights since they are bigger than I am, but I try to give as much of my weight as possible for him to carry to help simulate what he’ll see on a match day. I like to stay in his face and keep battling and applying pressure,” Oxley said. “It helps me because when I wrestle a 280-pounder in practice, going up against a 197 guy makes it easier to move around.”

Oxley shared Papadatos’ sentiment that Hughes can compete for the sport’s highest honors, including an All-America bid.

“He never lets up and he never gives opponents time to breathe, and that’s something a lot of heavyweights don’t do,” Oxley said. “The amount of stalling calls he draws is incredible. Every match he draws it because guys keep backing off the mat. He has the potential and work ethic to get to where he wants to be. He just has to go out there and do it now.”

Oxley said Hughes is a leader but doesn’t employ an in-your-face style. But with the season hitting the stretch drive – the EIWA championships are March 5-6 and the national championships, which are being hosted by Hofstra, will be held at Madison Square Garden from March 17-19 – Hughes will look to lead a charge that can propel both himself and his team to glory.

“He definitely leads by example,” Papadatos said. “He’s respectful; he’s kind – sometimes too kind. But he’s starting to get meaner on the mat. He’s the one person who is invited in every clique. I don’t know one person who has a bad thing to say about him. You would never know he’s more successful this year than he was as a freshman.”

Hofstra will resume EIWA action on Sunday against Drexel with a 4:30 p.m. match at the David S. Mack Sports and Exhibition Complex.