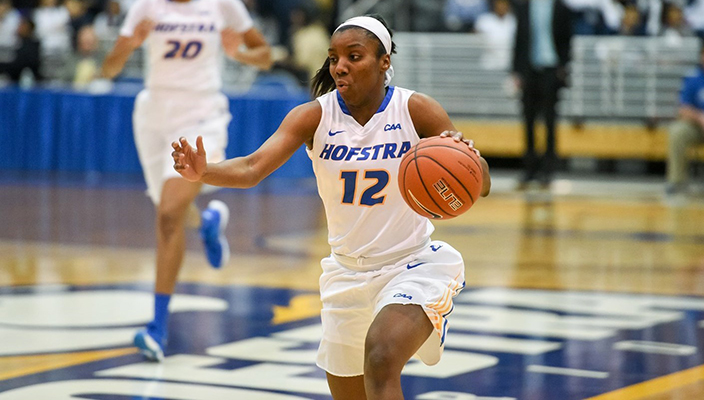 A battle for first place will feature Hofstra and defending Colonial Athletic Association-champion James Madison on Friday at 7 p.m. from the Mack Sports Complex. The game will be a rematch of last season’s CAA title game.

Game Notes | Pride Productions Live Video/Audio | Live Statistics |
Hofstra (16-4, 7-2 CAA) is off to the best start in program history and is one-half game behind James Madison (14-5, 7-1 CAA) and tied with Drexel for second place in the CAA. Fans can purchase tickets by visiting HofstraTickets.com, where it is now possible to print their tickets at home. In addition fans can also call or visit the Hofstra Athletics Box Office in the Mack Sports Complex for more ticket information.

There is a special 2-for-1 ticket deal available for the game in conjunction with the Hofstra Men’s Basketball team’s home game versus UNCW on Thursday at 7 p.m. Use the code “FIRSTPLACE” at HofstraTickets.com or call the Hofstra Athletics Box office  at (516) HOF-TIXX. Fans who purchase a ticket to the men’s basketball game on Thursday will receive a voucher for a free ticket to the Friday game. The women’s basketball game will also be Girl Scouts Day, where all Long Island troops are invited with special discounted tickets are available for all scouts and their guests for only $6. The contest has been designated Think Pink Day in support of breast cancer awareness. Everyone in attendance is asked to wear pink in support of the fight against breast cancer.

Pride Productions free live video and audio will also be available as well as live statistics. The Pride Productions audio only broadcast can also be heard via the portal and on the WRHU mobile app and 88.7 (WRHU) locally in the Hempstead area.

Hofstra and James Madison will be playing for the first time since last Mach when the Pride built a second-half lead in the title game before the Dukes won, 62-56. The matchup will feature the CAA’s two highest-scoring offenses. The Dukes are the only squad in the 10-team league averaging more than 70 points. Hofstra is second at 66.3 points. The two teams are also the league’s stingiest with Hofstra holding opponents to 56 points-per-game and James Madison coming in second at 56.5 points.

Since the 2014-15 season, JMU is 24-2 in regular season CAA games. The Dukes went 17-1 last season, though the only loss came to Hofstra. The Pride posted a win over then-No. 23 JMU in the Convocation Center, which marked just the second time in program history Hofstra defeated a ranked opponent. Four Hofstra players scored in double figures in that game, including Anjie White‘s 13 points.

White is coming off her second double-double of the season in Hofstra’s win at Elon. The junior forward has provided a solid inside game and has given Hofstra two effective forwards with sophomore Ashunae Durant leading the CAA with a 9.6 rebounding average while scoring 11.4 points per game. Junior guard Kelly Loftus continues to be the offensive catalyst in averaging 14.2 points and knocking down a team-high 47 three-pointers.

Hofstra is 9-0 at home this season, marking the first time in program history the school has won the first nine home games of a season. The Pride is out-scoring teams by 15.7 points-per-game at home. The familiar rims have helped the Pride post five wins by double figures. The team is out-rebounding foes by a 7.9 margin. At home, Hofstra has not allowed a team to crack the 70-point threshold.

Both Hofstra and JMU are ranked in the latest College Insider Women’s Mid-Major poll released on Feb. 2. The Dukes led all CAA teams in being ranked 15th while Hofstra came in at 21st. The Pride earned 164 total points.