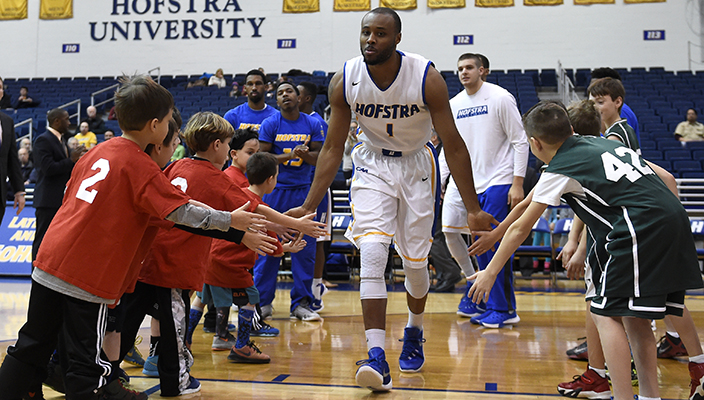 The Hofstra Men’s Basketball team will play arguably its biggest home game in quite some time on Thursday when the Pride take on UNCW in a battle for first place in the Colonial Athletic Association.

Hofstra fans – there is a special 2-for-1 ticket deal available for the game. Use the code “FIRSTPLACE” at HofstraTickets.com or call the Hofstra Athletics Box office. In addition, Hofstra students are encouraged to pick up their two free tickets in advance of the game at the ticket office in the lobby of the David S. Mack Sports and Exhibition Complex. There will also be a FREE student tailgate at the game.

ALSO – fans that purchase a ticket to the men’s basketball game on Thursday will receive a voucher for a free ticket to the Hofstra Women’s Basketball game against James Madison on Friday. That game will also feature a battle of the top two teams in the CAA.

Tip-off is scheduled for 7 p.m. from the Mack Sports Complex.

Fans can purchase tickets by visiting HofstraTickets.com, where it is now possible to print their tickets at home. In addition fans can also call (516) HOF-TIXX or visit the Hofstra Athletics Box Office in the Mack Sports Complex for more ticket information.

Both squads are 8-2 in league play with Hofstra holding an overall record of 16-6, while the Seahawks are 16-5 overall.

There will be Pride Productions live video of the game with links available on this page or via the men’s basketball schedule page at GoHofstra.com. The Pride Productions audio only broadcast can also be heard via the portal and on the WRHU mobile app.

Hofstra and UNCW will both bring win streaks into the game as well as the Pride has won four straight games and six of its last seven games – with the lone loss being an overtime defeat to James Madison. The Seahawks have won seven straight games since a loss at Towson on January 7.

Hofstra rallied in Philadelphia on Saturday to earn a 70-64 win over Drexel to continue its winning ways. The Pride’s two Philadelphia natives, senior guard Juan’ya Green and senior forward Ameen Tanksley, led the team with 15 points each – with Green adding seven rebounds and five assists. Sophomore center Rokas Gustys posted his eighth straight double-double and 12th of the season with 11 points and 12 rebounds against the Dragons.

During Hofstra’s four-game win streak it has been the duo of Green and Gustys that has led the way as over that stretch Green is averaging 20 points, eight assists and 5.5 rebounds, while Gustys is averaging 18.8 points and 15.5 rebounds.

Green is the Pride’s leading scorer on the year with 17.7 points and has dished out 150 assists to lead the team as well. Gustys ranks third on the squad in scoring at 13 points per game, while leading the way with 11.1 caroms per contest.

The milestone watch is on for Green as well as the talented Philadelphia native is only 31 points shy of reaching 1,000 for his career at Hofstra. Impressively he would become only the fourth player ever with 1,000 points at two different NCAA Division I schools.

Chris Flemmings leads UNCW in both scoring and rebounding with averages of 16.8 points and 6.4 rebounds per game. Jordon Talley has 92 assists to lead the Seahawks in that category, while also scoring 8.2 points per game.

The series between Hofstra and UNCW has been quite close with the Pride holding a narrow 17-15 lead in the all-time meetings. The series began when Hofstra joined the CAA beginning with the 2001-02 campaign. The Pride has won four of the last five meetings in the series, but last year the teams split the season series with each winning on the opponent’s home court.