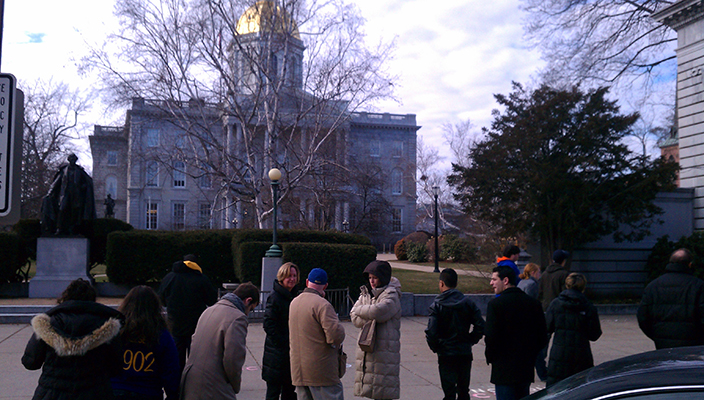 A group of approximately 110 Hofstra students and faculty members are heading to New Hampshire February 6-8 to experience the intense campaigning preceding the presidential primary. While on this trip, organized by the Department of Political Science, students will attend candidate events, interact with local experts and national media personalities, and perhaps even shake hands with the next president of the United States.

Held after the Iowa Caucuses, New Hampshire it is the first in a series of primaries that chooses the delegates who will serve at the national party conventions. According to Political Science Professor David Green, the Hofstra group will attend as many campaign rallies, pancake breakfasts, town halls and other events as they can squeeze into three days. While their itinerary is somewhat fluid, some planned activities include visiting the New Hampshire state capitol where they will meet with State Senator Lou D’Allessandro and watching the GOP debate at a viewing party hosted by the National Review. 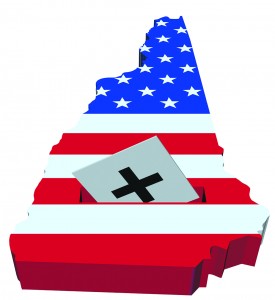 Political science major Natalie Mishkin, 19, a sophomore from Los Angeles, says, “I’m really excited to see the candidates speak and to be in the front and center of all the political action.” When asked which of the candidates she’d really like to meet, she says, “Although I am a Republican, I would like to meet Bernie Sanders, because I think he is an extremely influential and revolutionary candidate.  I would ask him what inspired him to run in this specific election year, given that he’s been in Congress for many years and a key figure in politics since the late 1970s.”

Jeremy Moskow, 21, a junior Global Studies and Geography major from Coral Springs, FL, expects that the trip to New Hampshire will augment his political understanding and help him decide on a candidate prior to submitting his Florida absentee ballot.

When asked which candidate he would most like to meet, he answers, “Easy. I would want to meet the man, the myth, the legend: The Donald. Whether or not I buy into his rhetoric is beside the point. His political tactics are undoubtedly unconventional, yet brilliant and somehow he has garnered almost all of the media attention.”

“Young people, especially college students, are in a prime position to be game changers,” Jeremy continues. “We are currently preparing for the work force, and in a few short years, we will be the backbone of American society. It is of upmost important that we use our political voice and that we engage in conversation that will quite literally dictate the America we live, work, and raise our families in. Going to an event like this, at a time like this, brings with it much responsibility. This experience will allow us to listen to – and hopefully meet – our future president.”

Throughout the three days, students will be posting photos and commentary on Tumblr and social media (#hofstranh16). Reporters from Hofstra’s Marconi Award-winning station WRHU-FM (88.7 FM) are accompanying the group and will be broadcasting from the campaign events.