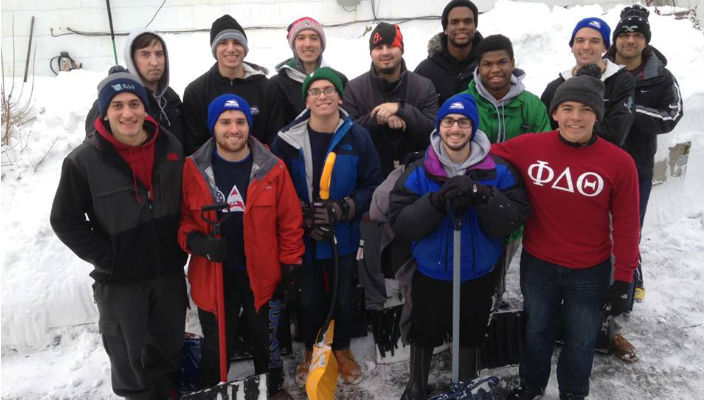 Members of the Phi Delta Theta fraternity once again braved the elements to shovel snow for local senior citizens, as part of the University’s Snow Angels program.

About a dozen students cleared sidewalks, walkways and driveways at the homes of 17 elderly or disabled residents, including two veterans, after Winter Storm Jonas dumped about two feet of snow in the Hempstead and Uniondale neighborhoods surrounding Hofstra last weekend.

“While it was hard work to lift all that heavy snow, it was really great to be with my brothers and know that our help was making an immediate impact,” said Justin Rezin ’17, a video/TV & business major and president of Phi Delta Theta.   He also participated in last year’s program, in which students cleaned ten homes.

Residents again wrote to express their appreciation to Anita Ellis, director of Off-Campus Living and Commuting Student Services, who created the program in 2011 as a service to seniors in the community.  “As usual, the young men were effective, efficient, and personable,” said one Hempstead resident.  “The students did a fabulous job in a short period of time,” said another. “Thanks for this service.”